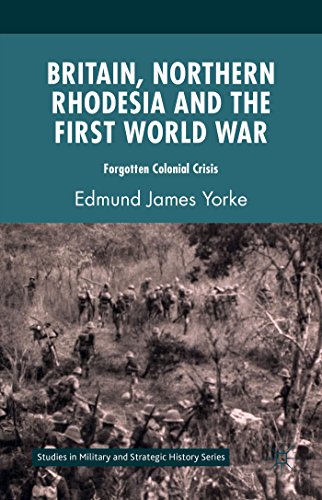 Britain, Northern Rhodesia and the First World War is an insightful account of the devastating impact of the Great War, upon the already fragile British colonial African state of Northern Rhodesia. Using extensive official and private records from Britain and Zambia and the testimonies of a few surviving African veterans, Edmund Yorke investigates how rapidly rising imperial war demands caused immense distress and discontent amongst the African population. With widespread famine, spiraling death rates and demands for thousands more African carriers and soldiers, this book examines how African resistance rapidly mounted. Examples of rising African desertion rates and mass refusal to pay colonial taxes as well as direct defiance of military recruiters are highlighted, as are brutal reprisals by both military and some colonial officials; eventually revealing how, finally, only news from Europe of the arrival of the Armistice saved Northern Rhodesia from total collapse.

“The author has filled a gap in the early years of Northern Rhodesia dominated by WWI. No-one before has brought together so much relevant material in such a concentrated form. ... The author is to be warmly congratulated for his contribution to such an important part of Northern Rhodesia’s social, imperial and military history and on the painstaking research entailed.” (Roland A. Hill, The Overseas Pensioner, Issue 111, April, 2016)

Edmund Yorke is currently Senior Lecturer in the War Studies Department at the Royal Military Academy, Sandhurst, UK. He has authored works on British Imperial and Commonwealth political and military affairs and his recent books include The New South Africa (1998), Playing the Great Game (2012), Battle Story's Rorkes Drift and Isandlwana (2011 and 2012), and Mafeking (2014).