Items related to The British General Election of 2015

The British General Election of 2015 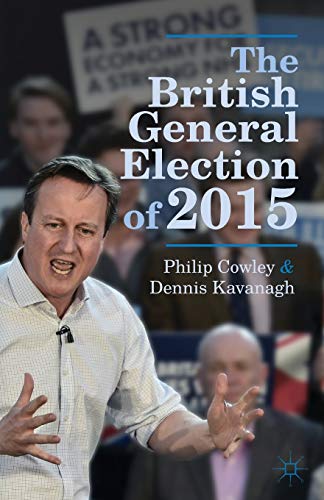 The British General Election of 2015 is a must-read for anyone wanting to know how the action unfolded in the most unpredictable election for a generation.

'...a riveting read... Forget the Blair and Mandelson works - this is easily the best political book of the year.' – Mike Smithson, PoliticalBetting.com

'It's popular academic writing at its best, combining a clear narrative (using anecdotes and quotes garnered from more than 300 background interviews) with lots of solid, meaty number-crunching.' – Andrew Sparrow, The Guardian

'Dennis Kavanagh and Philip Cowley have penned a political thriller.... The book is distinguished by the quality of its sources: the ministers, aides and strategists who open up to these academics in a way they might not to journalists.' – The Observer

'Mandelson and Blair's books will get all the attention, but if you want real insight into the last election, Kavanagh and Cowley look like they're on the money.' – Paul Waugh, London Evening Standard

'required reading for anyone interested in British politics' – Progress

'A British General Election is not over until this book appears.' – Peter Hennessy, FBA, Attlee Professor of Contemporary History, Queen Mary, University of London, UK

'The quality of the analysis is as sharp as ever' – Lord Adonis, Fabian Review

'The original and still the best. Kavanagh and Cowley use their unparalleled access to Britain's top politicians and their backroom staff to produce an account of this historic election, and the formation of the coalition that followed it, which rings true at every level. Authoritative, fascinating, and often wryly amusing, this book once again sets the standard.' – Tim Bale, Professor of Politics, Sussex University, author of The Conservative Party from Thatcher to Cameron

'The gold standard of political writing. If you want to know what really happened in the 2010 General Election, look no further. This is the first draft of history, fresh and authoritative ... our first TV debates, the election that never was in 2007, the whole drama is explained with wit and authority.' – Gary Gibbon, Political Editor, Channel 4

'As lively as the best journalism and as rigorous as the best academic treatise, the ... series fully deserve their reputation as the best books on national elections anywhere in the world. In order to unravel the full story of the 2010 election and its extraordinary aftermath, Dennis Kavanagh and Philip Cowley have talked at length to insiders at the heart of each party's campaign – and it shows. The result is a book that fully maintains the dazzling standards set over half a century by the incomparable David Butler.'– Peter Kellner, President, YouGov

'The General Election series of books has become an institution. Dennis Kavanagh is one of the wisest minds patrolling the borders of academic politics and contemporary history and Philip Cowley is a brilliant choice to join him in maintaining the series. He is one of the sharpest chroniclers of Westminster politics: I admire his independence of judgement and willingness to puncture bubbles of media myth about the way that Parliament and Government works.' – John Rentoul, Chief Political Editor, Independent on Sunday

'The 2010 election was like no other. There is still much to learn about what happened during the campaign and Cowley and Kavanagh lay out all the facts in clear, comprehensible detail. Access to sources at the very top of the political parties ensures this book is essential reading if you want to know what really went on behind the scenes.' – Andrew Hawkins, Chief Executive, ComRes

'The 65-year-old series of books on British General Elections has become the Wisden of politics – essential reading for anyone wanting to know what happened during the campaigns and the significance of the outcome.' – Peter Riddell, Senior Fellow, The Institute for Government and former Chief Political Commentator of The Times

The British General Election of 2015 is a must-read for anyone wanting to know how the action unfolded in the most unpredictable election for a generation. Drawing on hundreds of confidential interviews with all the key players, it offers a compelling insider's guide to the election's background, campaign, and the results which led to the formation of the first majority Conservative government in eighteen years. Designed to appeal to everyone from Westminster insiders, politics students and the wider general public, this is the authoritative account of the 2015 election. Continuing a proud Palgrave Macmillan tradition, The British General Election of 2015 is the 19th edition and celebrates the 70th year of this prestigious series.

1. The British General Election of 2015 (Paperback or Softback)