Items related to Entrepreneurship and Growth 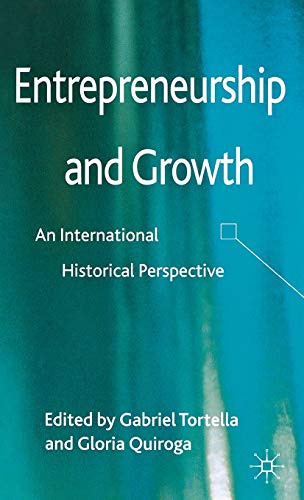 Up-to-date research on the factors which contribute to the build-up of entrepreneurship. This volume provides an international, comparative and historical perspective, with a special focus on Mediterranean countries including Spain, Italy and Greece. The authors take a quantitative approach in their exploration of these, as well as many other countries including England, Scotland and Argentina. Whilst several chapters explore entrepreneurial success as their main dependent variable and study the factors that explain it, others deal with a variety of topics such as education, innovation, immigration, kinship links, the role of investment, geographical factors, and macroeconomic variables.

Recent research on the factors of entrepreneurship from an international, comparative and historical perspective

Gabriel Tortella holds a PhD in Economics from the University of Wisconsin and a Doctorate in Law from the Universidad Complutense, and is Professor Emeritus of Economic History at the Universidad de Alcalá. He has been Associate Professor at the University of Pittsburgh. He received the King Juan Carlos Economics Prize in 1994, and has been President of the International
Economic History Association, the Spanish Economic History Association, and Chairman of the Academic Council of the European Association for Banking and Financial History (Frankfurt). He is also a member of the Academia Europaea (London) and the European Academy of Sciences and Arts (Salzburg). Among his many publications, recent books include The Development of Modern Spain (2000), The Origins of the Twenty-First Century (2010), and, with J. A. Consiglio and J. C. Martínez Oliva, Banking and Finance in the Mediterranean (2012).

Gloria Quiroga is Assistant Professor at the Complutense University, Spain and holds an MA degree in History from the University of Cantabria and a PhD in Economics from The University of Alcalá. She was previously Professor at the University Carlos III, Cantabria and the Alcalá. She has also been Visiting Scholar at Harvard University, USA. She has published extensively on the relationship between stature and standard of living conditions and her present research interest is the determinants of entrepreneurship in the history of Spain, as shown in the book Educación, Instituciones y empresa: los determinants del
espíritu empresarial (2008) with G. Tortella, J. L. García-Ruiz and J. M. Ortiz-Villajos.

Book Description Palgrave MacMillan, United Kingdom, 2013. Hardback. Condition: New. 2013 ed. Language: English. Brand new Book. A collection of eight articles by 17 specialists, this volume provides very recent research on the factors which contribute to the build up of entrepreneurship. Offers an international, comparative and historical perspective, with a special focus upon the Mediterranean. Seller Inventory # LHB9781137033345