The Crowd Funding Services Handbook: Raising the Money You Need to Fund Your Business, Project, or Invention (Wiley Finance) 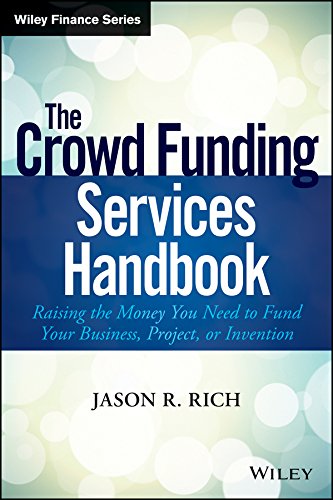 Crowdsource funding is the new way to finance start-ups in a networked world Entrepreneurs, small business owners, investors, artisans, or those who merely have a good idea for a business venture have a new and attainable means of securing capital to grow their dreams. Gone are the days when the only options to raise funds for a new business were venture capitalists, angel investors, or Wall Street. Web-based crowdfunding services are now plentiful and offer a variety of options for the aspiring entrepreneur. However, these services are not typically as well-understood as the more traditional means of raising capital. In The Crowdsource Funding Services Handbook, author Jason R. Rich offers a step-by-step overview of the various crowdsource funding services available on the Web, as well as the necessary documentation required to launch a successful crowdfunding campaign. * Contains details on how to evaluate and select the best online platform for crowdfunding efforts * Provides details on creating a business plan to the specifications require to raise capital via crowdfunding * Provides an overview of the financial projections that will be required for a crowdfunding initiative * Proposes a specific approach to creating a "pitch video" to succeed with a crowdsource funding campaign The Crowdsource Funding Services Handbook is a thorough, well-developed resource for those seeking to raise capital to start a business or fund the development of an innovative idea. Author and crowdfunding expert Jason R. Rich provides this definitive, hands-on guide to raising capital in the new economy.

Get your project funded the Crowd Funding way

Have a great idea that needs financial backing? The Crowd Funding Services Handbook offers entrepreneurs in every industry a new means of securing capital that will help make their dream projects a reality. This comprehensive resource offers a step-by-step guide for creating and managing an effective crowd funding effort while at the same time avoiding the common missteps that so often stymie early-stage funding seekers.

Jason R. Rich outlines the process of using a service such as Kickstarter or Indiegogo to implement and direct a winning crowd funding campaign. He shows how to attract highly targeted backers and supporters using social media. In addition, Rich reveals how to put in place successful online advertising, public relations, and other efforts that will cater to the wants and needs of the backers who will play a pivotal role in the funding of a project idea.

The Crowd Funding Services Handbook is an accessible resource for anyone who wants to run a reward- or pre-sale-based crowd funding campaign that will get results.

JASON R. RICH (www.JasonRich.com) is the bestselling author of more than 55 books, as well as a frequent contributor to numerous national magazines, major daily newspapers, and popular websites. He has written extensively about online social networking and is the author of The Unofficial Guide to Starting a Business Online from Wiley.

The Crowd Funding Services Handbook: Raising the Money You Need to Fund Your Business, Project, or Invention

The Crowd Funding Services Handbook: Raising the Money You Need to Fund Your Business, Project, or Invention (Wiley Finance)