Items related to Switching in Electrical Transmission and Distribution... 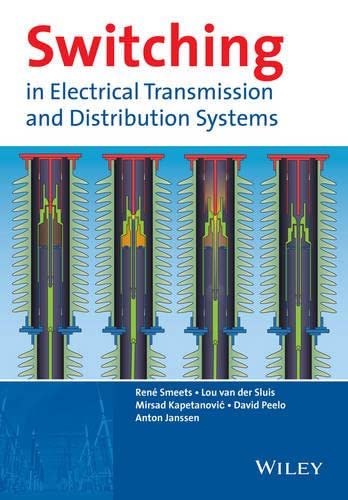 "Engineers who design and perform testing of MV and HV circuit breakers, load break switches, or fuses as well as MV and HV test lab managers will find this book to be a very useful and handy reference." (IEEE Electrical Engineering magazine, 1 July 2015)

Rene Smeets has for more than 30 years been involved in switching with switchgear ranging from 10 1200 kV. For the last 19 years he has worked at DNV GL (former KEMA) high-power laboratory in the Netherlands. Alongside this he is active in various positions in CIGRE: as convener and member of working groups dealing with switching equipment and testing. He is also a convener of IEC standardization teams with respect to high-voltage switchgear. He is a Fellow of IEEE. Amongst his scientific activities, he is currently chairman of the Current Zero Club , an informal group of specialists dealing with current interruption phenomena. He holds a Ph.D. and was appointed as a part-time professor at Eindhoven University in 2001 and adjunct-professor at Xi an Jiaotong University in 2013. He has been a guest-editor of IEEE Journals and has published numerous papers on switching and testing. He has given courses on switching and switchgear worldwide. Lou van der Sluis obtained his M.Sc. in electrical engineering from the Delft University of Technology. He joined the KEMA High Power Laboratory in 1977 as a test engineer and was involved in the development of a data acquisition system, computer calculations of test circuits and the digital analysis of test data. Since 1992 he has been employed as a full-time professor at the Delft University of Technology in the Power Systems Department. He is a senior member of IEEE and past convener of CC 03 of CIGRE/CIRED studying the transient recovery voltages in medium and high voltage networks. He is currently a member of CIGRE WG A3.24 on internal arc testing and co-convener of CIGRE WG C4.502 studying the interaction between high-voltage overhead lines and underground cables. He is a member of the advisory board of CIGRE SC A3. Mirsad Kapetanoviae received the M.Sc. degree in endurance of high-voltage circuit breakers in 1993, and the Ph.D. degree for discovery of Algebra of fractal vector (Bosnian algebra) in 1997 from the Sarajevo University, Bosnia and Herzegovina. He has been with the Energoinvest Electric Power Institute (IRCE), Sarajevo, since 1977. In 1982, he became Head of the high voltage circuit-breakers design department at IRCE. In 1997, he was appointed part-time professor at the Faculty of Electrical Engineering, University of Sarajevo. Currently, he is Professor at the faculty and part-time R&D Manager of EnergoBos Company from Sarajevo. Dr. Kapetanovic is a Member of IEEE, Distinguished Member of CIGRE, regular member of CIGRE Study Commitee SC A3 (High Voltage Equipment), 2002 2008; regular member of SC 13 (Switching Equipment), 1996 2002; and, as of 1990, member of the CIGRE Working Group 13.01 (Practical Application of Arc Physics in Circuit Breakers). David Peelo was born in 1943 in Dublin, Ireland. After completing high school, he studied electrical engineering at University College Dublin and graduated cum laude in 1965. His first employment was at the ASEA High Voltage Laboratory in Ludvika, Sweden. In 1973 he joined BC Hydro in Vancouver, British Columbia, Canada, eventually becoming a switchgear and switching specialist. He took early retirement in 2001 to pursue a new career as an independent consultant and to undertake postgraduate work as represented by this thesis. He obtained a Ph.D. degree in switching with HV air-break disconnectors in 2004. He is active in CIGRE, IEC and IEEE committees and working groups and has authored or co-authored over 40 technical papers. Anton Janssen served 35 years in management functions within the electric transmission and electricity/gas distribution industry, including management responsibility for KEMA High Power Laboratory. He is active in national and international organizations dealing with technical, managerial and strategic network issues. He was convener of a number of CIGRE working groups and was special reporter at many CIGRE SC 13/A3 sessions and symposia. Mr Janssen has special interest in the fields of electric transients, in protection and system stability issues, in asset- and life-management issues, in network development and planning, in optimizing the combination of various energy carriers (such as gas, electricity and heat), in the co-operation between utilities and authorities, in optimizing the network and substation topology, in incorporating the volatile sustainable sources of power (electricity, gas and a combination of both) and in coaching Ph.D. students.

Book Description Condition: New. Brand New Original US Edition.We Ship to PO BOX Address also. EXPEDITED shipping option also available for faster delivery.This item may ship from the US or other locations in India depending on your location and availability. Seller Inventory # ANNNUS-156013

Book Description Condition: New. Brand New Original US Edition. Customer service! Satisfaction Guaranteed. This item may ship from the US or our Overseas warehouse depending on your location and stock availability. We Ship to PO BOX Location also. Seller Inventory # SNTAB-156013