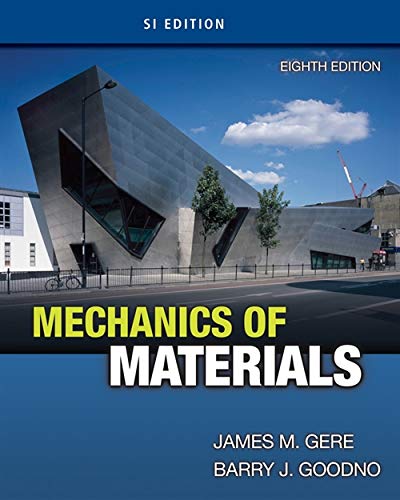 The Eighth Edition of MECHANICS OF MATERIALS continues its tradition as one of the leading texts on the market. With its hallmark clarity and accuracy, this text develops student understanding along with analytical and problem-solving skills. The main topics include analysis and design of structural members subjected to tension, compression, torsion, bending, and more. The book includes more material than can be taught in a single course giving instructors the opportunity to select the topics they wish to cover while leaving any remaining material as a valuable student reference.

"The homework problems are perhaps the strongest point of the text. The problems cover the waterfront in variety, complexity and coverage. They include numerous examples that are found inthe real world and students can identify with them."

"The author has done an excellent job conveying the concepts. The textbook is easy to follow and all the ideas are clearly presented."

"This is a detailed overview of undergraduate solid mechanics. It is an excellent book, and far superior to current texts, which borrowed extensively from Gere."

"The books strongest feature is the comprehensive coverage and reasonableness of the homework problems in establishing a base of understanding of expected levels of stress, strain, and displacement."

"The authors do and excellent job of discussing the topics at a level I believe will be absorbed by the students. They also make a good effort to highlight the important issues and points in the text by italicizing or bolding. I feel that the author has done an excellent job of relating real structures to solid body analysis techniques, and haspresented and discussed it in a manner that I think students will appreciate."

Barry John Goodno is Professor of Civil and Environmental Engineering at Georgia Institute of Technology. He joined the Georgia Tech faculty in 1974. He was an Evans Scholar and received a B.S. in Civil Engineering from the University of Wisconsin, Madison, Wisconsin, in 1970. He received M.S. and Ph.D. degrees in Structural Engineering from Stanford University, Stanford, California, in 1971 and 1975, respectively. He holds a professional engineering license (PE) in Georgia, is a Distinguished Member of ASCE and an Inaugural Fellow of SEI, and has held numerous leadership positions within ASCE. He is a member of the Engineering Mechanics Institute (EMI) of ASCE and is a past president of the ASCE Structural Engineering Institute (SEI) Board of Governors. He is past-chair of the ASCE-SEI Technical Activities Division (TAD) Executive Committee, and past-chair of the ASCE-SEI Awards Committee. In 2002, Dr. Goodno received the SEI Dennis L. Tewksbury Award for outstanding service to ASCE-SEI. He received the departmental award for Leadership in Use of Technology in 2013 for his pioneering use of lecture capture technologies in undergraduate statics and mechanics of materials courses at Georgia Tech. He is a member of the Earthquake Engineering Research Institute (EERI) and has held several leadership positions within the NSF-funded Mid-America Earthquake Center (MAE), directing the MAE Memphis Test Bed Project. Dr. Goodno has carried out research, taught graduate courses and published extensively in the areas of earthquake engineering and structural dynamics during his tenure at Georgia Tech. Dr. Goodno is an active cyclist, retired soccer coach and referee, and a retired marathon runner. Like co-author and mentor James Gere, he has completed numerous marathons including qualifying for and running the Boston Marathon in 1987.

James M. Gere (1925-2008) earned his undergraduate and master’s degrees in Civil Engineering from the Rensselaer Polytechnic Institute, where he worked as instructor and Research Associate. He was awarded one of the first NSF Fellowships and studied at Stanford, where he earned his Ph.D. He joined the faculty in Civil Engineering, beginning a 34-year career of engaging his students in mechanics, structural and earthquake engineering. He served as Department Chair and Associate Dean of Engineering and co-founded the John A. Blume Earthquake Engineering Center at Stanford. Dr. Gere also founded the Stanford Committee on Earthquake Preparedness. He was one of the first foreigners invited to study the earthquake-devastated city of Tangshan, China. Dr. Gere retired in 1988 but continued to be an active, valuable member of the Stanford community. Dr. Gere was known for his cheerful personality, athleticism, and skill as an educator. He authored nine texts on engineering subjects starting with Mechanics of Materials, a text that was inspired by his teacher and mentor Stephan P. Timoshenko. His other well-known textbooks, used in engineering courses around the world, include: Theory of Elastic Stability, co-authored with S. Timoshenko; Matrix Analysis of Framed Structures and Matrix Algebra for Engineers, both co-authored with W. Weaver; Moment Distribution; Earthquake Tables: Structural and Construction Design Manual, co-authored with H. Krawinkler; and Terra Non Firma: Understanding and Preparing for Earthquakes, co-authored with H. Shah. In 1986 he hiked to the base camp of Mount Everest, saving the life of a companion on the trip. An avid runner, Dr. Gere completed the Boston Marathon at age 48 in a time of 3:13. Dr. Gere is remembered as a considerate and loving man whose upbeat humor always made aspects of daily life and work easier.