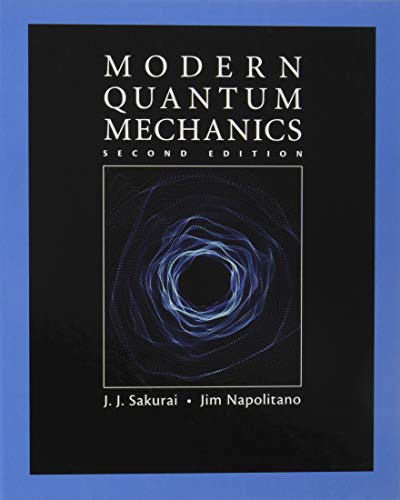 Modern Quantum Mechanics is a classic graduate level textbook, covering the main quantum mechanics concepts in a clear, organized and engaging manner. The author, Jun John Sakurai, was a renowned theorist in particle theory. The second edition, revised by Jim Napolitano, introduces topics that extend the text's usefulness into the twenty-first century, such as advanced mathematical techniques associated with quantum mechanical calculations, while at the same time retaining classic developments such as neutron interferometer experiments, Feynman path integrals, correlation measurements, and Bell's inequality. A solution manual for instructors using this textbook can be downloaded from www.cambridge.org/9781108422413.

A re-issued edition of this well-known modern quantum mechanics textbook. The Second Edition provides a graduate-level, non-historical, modern introduction of quantum mechanical concepts, from the Schrödinger Wave Equation to SO(4) symmetry and its application to solving the hydrogen atom, in one comprehensive and engaging volume.

Jim Napolitano earned an undergraduate Physics degree at Rensselaer Polytechnic Institute in 1977, and a Ph.D. in Physics from Stanford University in 1982. Since that time, he has conducted research in experimental nuclear and particle physics, with an emphasis on studying fundamental interactions and symmetries. He joined the faculty at Rensselaer in 1992 after working as a member of the scientific staff at two different national laboratories. Since 2014 he has been Professor of Physics at Temple University, Philadelphia. He is author and co-author of over 150 scientific papers in refereed journals. Professor Napolitano maintains a keen interest in science education in general, and in particular physics education at both the undergraduate and graduate levels. He has taught both graduate and upper-level undergraduate courses in Quantum Mechanics, as well as an advanced graduate course in Quantum Field Theory.