Items related to Women of Fortune: Money, Marriage, and Murder in Early... 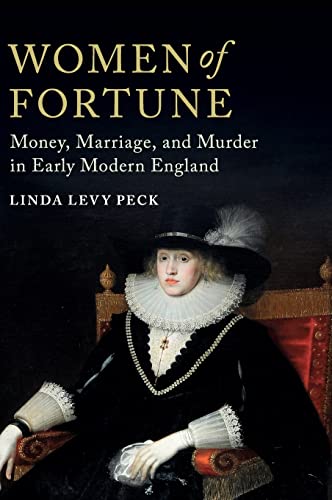 Women of Fortune tells the compelling story of mercantile wealth, arranged marriages, and merchant heiresses who asserted their rights despite loss, imprisonment, and murder. Following three generations of the Bennet and Morewood families, who made their fortune in Crown finance, the East Indies, the Americas, and moneylending, Linda Levy Peck explores the changing society, economy, and culture of early modern England. The heiresses - curious, intrepid, entrepreneurial, scholarly - married into the aristocracy, fought for their property, and wrote philosophy. One spent years on the Grand Tour. Her life in Europe, despite the outbreak of war, is vividly documented. Another's husband went to debtors' prison. She recovered the fortune and bought shares. Husbands, sons, and contemporaries challenged their independence legally, financially, even violently, but new forms of wealth, education, and the law enabled these heiresses to insist on their own agency, create their own identities, and provide examples for later generations.

'In this exhaustively researched and skillfully presented book, Linda Levy Peck recasts passive heiresses as active wives. Promoting their own ambitions and reshaping the families into which they married, these 'women of fortune' creatively re-energized elite cultures and pushed out the boundaries of female opportunity. Peck rightly and rigorously positions them at the very center of England's early modern social order.' Cynthia Herrup, J. R. Hubbard Professor of History Emerita, University of Southern California

'Women of Fortune opens with the grim details of the murder of a noblewoman described by a peer as 'the most sordid person who ever lived ...' and then explores a huge web of connection across a whole century and across city, county, and a continent, opening up the economic, social, and cultural dimensions of that web, seen mainly through the eyes of its wonderfully feisty female members. This book is as illuminating as it is evocative.' John Morrill, Professor Emeritus of British and Irish History, University of Cambridge

'In this important book, Linda Levy Peck traces the fortunes of the descendants of two London apprentices who made good in early seventeenth-century London. The agency and enterprise of women are at the heart of her story, mostly merry widows making and spending money, travelling the continent, although in one unfortunate case, being murdered for their gold by the local butcher. Engaging detail and vivid personalities combine in a compelling account of fundamental transformation over a century and a half - of social mobility, new forms of wealth and credit, and improved opportunities for elite women.' Ann Hughes, Keele University

Women of Fortune tells the compelling story of mercantile wealth, arranged marriages and merchant heiresses who asserted their rights despite loss, imprisonment and murder. Following the Bennet and Morewood families across three generations, Linda Levy Peck provides new insight into the social, economic and cultural history of early modern England.

Book Description Hardcover. Condition: New. Hardcover. Women of Fortune tells the compelling story of mercantile wealth, arranged marriages, and merchant heiresses who asserted their rights despite loss, imprisonment, and murder. Following thr.Shipping may be from multiple locations in the US or from the UK, depending on stock availability. 350 pages. 0.896. Seller Inventory # 9781107034020