Items related to Conclave: A novel 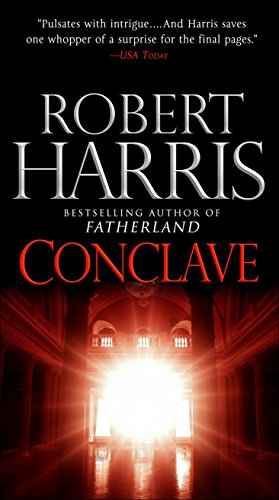 The best-selling author of Enigma and Fatherland turns to today's Vatican in a ripped-from-the-headlines novel, and gives us his most ambitious, page-turning thriller yet--where the power of God is nearly equaled by the ambition of men.

The pope is dead. Behind the locked doors of the Sistine Chapel, one hundred and eighteen cardinals from all over the globe will cast their votes in the world's most secretive election. They are holy men. But they have ambition. And they have rivals. Over the next seventy-two hours one of them will become the most powerful spiritual figure on Earth.

ROBERT HARRIS is the author of ten best-selling novels: Fatherland, Enigma, Archangel, Pompeii, Imperium, The Ghost Writer, Conspirata, The Fear Index, An Officer and a Spy, and Dictator. Several of his books have been adapted to film, most recently The Ghost Writer, directed by Roman Polanski. His work has been translated into thirty-seven languages. He lives in the village of Kintbury, England, with his wife, Gill Hornby.

At 6:30 a.m., the alarm sounded throughout the Casa Santa Marta—a clanging seminary bell. Lomeli opened his eyes. He was curled up on his side. He felt groggy, raw. He had no idea how long he had been asleep, only that it couldn’t have been for more than an hour or two. The sudden remembrance of all he had to do in the coming day passed over him like a wave of nausea, and for a while he lay unable to move. Normally his waking routine was to meditate for fifteen minutes then rise and say his morning prayers. But on this occasion, when at last he managed to summon the will to put his feet to the floor, he went directly into the bathroom and ran a shower as hot as he could bear. The water scourged his back and shoulders. He twisted and turned beneath it and cried out in pain. Afterwards he rubbed away the moisture on the mirror and surveyed with disgust his raw and scalded skin. My body is clay, my good fame a vapour, my end is ashes.

He felt too tense to breakfast with the others. He stayed in his room, rehearsing his homily and attempting to pray, and left it until the very last minute to go downstairs.

The lobby was a red sea of cardinals robing for the short procession to St. Peter’s. The officials of the Conclave, led by Archbishop Mandorff and Monsignor O’Malley, had been allowed back into the hostel to assist; Father Zanetti was waiting at the foot of the stairs to help Lomeli dress. They went into the same waiting room opposite the chapel in which he had met Woźniak the night before. When Zanetti asked him how he had slept, he replied, “Very soundly, thank you,” and hoped the young priest would not notice the dark circles beneath his eyes and the way his hands shook when he handed him his sermon for safe keeping. He ducked his head into the opening of the thick red chasuble that had been worn by successive Deans of the College over the past twenty years and held out his arms as Zanetti fussed around him like a tailor, straightening and adjusting it. The mantle felt heavy on his shoulders. He prayed silently: Lord, who hast said, My yoke is easy and My burden is light, grant that I may so bear it as to attain Thy grace. Amen. Zanetti stood in front of him and reached up to place upon

Zanetti stood in front of him and reached up to place upon his head the tall mitre of white watered silk. The priest stepped back a pace to check it was correctly aligned, squinted, came forward again and altered it by a millimetre, then walked behind Lomeli and tugged down the ribbons at the back and smoothed them. It felt alarmingly precarious. Finally he gave him the crozier. Lomeli lifted the golden shepherd’s crook a couple of times in his left hand, testing the weight. You are not a shepherd, a familiar voice whispered in his head. You are a manager. He had a sudden urge to give it back, to tear off the vestments, to confess himself a fraud and disappear. He smiled and nodded. “It feels good,” he said. “Thank you.”

Just before 10 a.m., the cardinals began moving off from the Casa Santa Marta, walking out of the plate-glass doors in pairs, in order of seniority, checked off by O’Malley on his clipboard. Lomeli, resting on the crozier, waited with Zanetti and Mandorff beside the reception desk. They had been joined by Mandorff’s deputy, the Dean of the Master of Papal Ceremonies, a cheerful, tubby Italian monsignor named Epifano, who would be his chief assistant during the Mass. Lomeli spoke to no one, looked at no one. He was still trying vainly to clear a space in his mind for God. Eternal Trinity, I intend by Your grace to celebrate Mass to Your glory, and for the benefit of all, both living and dead, for whom Christ died, and to apply the ministerial fruit for the choosing of a new Pope . . .

At last they stepped out into the blank November morning. The double file of scarlet-robed cardinals stretched ahead of him across the cobbles towards the Arch of the Bells, where they disappeared into the basilica. Again the helicopter hovered somewhere nearby; again the faint sounds of demonstrators carried on the cold air. Lomeli tried to shut out all distractions, but it was impossible. Every twenty paces stood security men who bowed their heads as he passed and blessed them. He walked with his supporters beneath the arch, across the piazza dedicated to the early martyrs, along the portico of the basilica, through the massive bronze door and into the brilliant illumination of St. Peter’s, lit for the television cameras, where a congregation of twenty thousand was waiting. He could hear the chanting of the choir beneath the dome and the vast echoing rustle of the multitude. The procession halted. He kept his eyes fixed straight ahead, willing stillness, conscious of the immense throng standing close-packed all around him—nuns and priests and lay clergy, staring at him, whispering, smiling.

Eternal Trinity, I intend by Your grace to celebrate Mass to Your glory . . .

After a couple of minutes, they moved on again, up the wide central aisle of the nave. He glanced from side to side, leaning on the crozier with his left hand, motioning vaguely with his right, conferring his blessing upon the blur of faces. He glimpsed himself on a giant TV screen—an erect, elaborately costumed, expressionless figure, walking as if in a trance. Who was this puppet, this hollow man? He felt entirely disembodied, as though he were floating alongside himself.

At the end of the aisle, where the nave gave on to the cupola of the dome, they had to pause beside Bernini’s statue of St. Longinus, close to where the choir was singing, and wait while the last few pairs of cardinals filed up the steps to kiss the central altar and descended again. Only when this elaborate manoeuvre had been completed was Lomeli himself cleared to walk around to the rear of the altar. He bowed towards it. Epifano stepped forward and took away the crozier and gave it to an altar boy. Then he lifted the mitre from Lomeli’s head, folded it, and handed it to a second acolyte. Out of habit, Lomeli touched his skullcap to check it was in place.

Together he and Epifano climbed the seven wide carpeted steps to the altar. Lomeli bowed again and kissed the white cloth. He straightened and rolled back the sleeves of his chasuble as if he were about to wash his hands. He took the silver thurible of burning coals and incense from its bearer and swung it by its chain over the altar—seven times on this side, and then, walking round, a separate censing on each of the other three. The sweet-smelling smoke evoked feelings beyond memory. Out of the corner of his eye he saw dark-suited figures moving his throne into position. He gave back the thurible, bowed again and allowed himself to be conducted round to the front of the altar. An altar boy held up the missal, opened to the correct page; another extended a microphone on a pole.

Once, in his youth, Lomeli had enjoyed a modest fame for the richness of his baritone. But it had become thin with age, like a fine wine left too long. He clasped his hands, closed his eyes for a moment, took a breath, and intoned in a wavering plainsong, amplified around the basilica:

Book Description Mass Market Paperback. Condition: New. Mass Market Paperback. The best-selling author of Enigma and Fatherland turns to today's Vatican in a ripped-from-the-headlines novel, and gives us his most ambitious, page-turning thriller yet--wher.Shipping may be from multiple locations in the US or from the UK, depending on stock availability. 416 pages. 0.227. Seller Inventory # 9781101972908