Items related to Own It: The Power of Women at Work

Sallie Krawcheck Own It: The Power of Women at Work

Own It: The Power of Women at Work 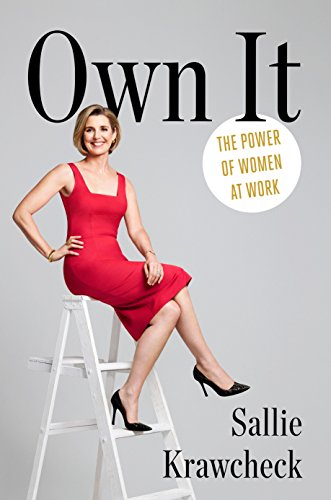 aa Picking up the women and success conversation where Sheryl Sandberg left off, Krawcheck shows women how to take their careers to the next levela.by playing by a new set of rules that build on their natural strengths. a So much advice for women talks about how to succeed in the static business world of yesterday and today. But that world is rapidly changing, and these changes are empowering women in unprecedented ways. Because in the increasingly complex, connected, and technology-driven world of tomorrow where communication and collaboration rule the day athe skills and qualities needed for success are ones that women inherently possess- in spades.a a By owning those qualities - qualities that make women amazing collaborators, extraordinary leaders and invaluable assets in the business world - ayou have more power and potential than you realize.a a Here Krawcheck draws on her experiences at the highest levels of business, both as one of the lone women at the top rungs of the biggest boys club in the world, and as an entrepreneur, to show how women can tap into these skills - and their enormous economic power - to elevate their careers- everything from getting the raise, to new takes on networking and mentoring, to navigating career breaks and curveballs and forging non-traditional career paths, to how to initiate the ocourageous conversationso about true flexibility and diversity in the workplace. We can have a more significant role than ever in shaping our companies - and building new companies - into places we want to work.aa a Lighting the path to complete the revolution ignited by Gloria Steinem, Krawcheckashows how each one of us can leverage our growing power to own our careers and our futures.

"It's no secret the business world is in a time of transformation, largely driven by technology. Increased automation means that skills like collaboration, creativity and relationship-building are even more valuable. As Krawcheck shows, women are uniquely positioned to succeed by tapping into these skills they already possess. Own It is a manual for how women can both thrive and accelerate these changes which will benefit both men and women." - Arianna Huffington, founder and CEO of Thrive Global and author of Thrive "It's easy to get caught up in all the stereotypes and misconceptions about what it means to be a powerful woman. Sallie Krawcheck sets the record straight, showing that being a powerful woman in business isn't about being the fastest or strongest or best at playing the "man's game." Because the world is changing in ways that give women more of an edge than ever. Whether we leverage it to rise up in our careers, start businesses, or make a difference with our dollars, that power is real - and it's time to own it." - Venus Williams "Take it from the most powerful woman on Wall Street: our future depends on women. With courage, charisma, and cold hard facts, Sallie Krawcheck shows that instead of playing by the rules men created, it's time for women to rewrite the rules." - Adam Grant, Wharton professor and New York Times bestselling author of Originals and Give And Take "In today's complex world where real change is happening in real time, all companies are grappling with the challenge of reimagining their way forward. Doing so requires a culture of collaboration, openness and questioning - and diversity of thought, perspective and, yes, gender. In this cogent and unflinchingly honest book Sallie Krawcheck inspires women to embrace the power of their diversity to reimagine their careers." - Beth Comstock, Vice Chair, GE "Young women are raised to think they don't have the natural skills to succeed in a "man's world." In this inspiring book, Krawcheck shows why stereotypically "female" qualities are actually a source of strength. This book fills me with hope that our next generation of young women will grow up believing they are brave and capable of changing the world." - Reshma Saujani, Founder and CEO, Girls Who Code

"In Own It, Sallie Krawcheck lays out the business case for workplace equality and the roles all of us must play in shifting our companies toward equal pay, equal opportunity, equal advancement and equal rights for all." - Marc Benioff, Chairman and CEO, Salesforce "Having worked at the top rungs on Wall St at time when groupthink nearly ran our economy into the ground, Sallie Krawcheck knows better than anyone that doing business the "old boys club way" is no longer viable. In this powerful, honest, and yet intensely optimistic book, she shows why women today have more options than ever, and how we can seize them by bringing our true selves to work." - Karen Finerman, CEO of Metropolitan Capital Advisors

"Too many business leaders still look at the gender pay gap and the lack of women in senior positions a "women's' issue." Sallie Krawcheck has been there, and she knows better. Own It shows how the rise of women in business boosts the economy and society as a whole. Companies and leaders who recognize and embrace this will prosper. In today's competitive economy, Sallie tells us how to leverage the growing power of women in ways that benefit us all." --- Ian Bremmer, president and founder of Eurasia Group and author of Superpower About the Author:

Sallie Krawcheck is the Co-founder and CEO of Ellevest, an innovative digital investment platform designed to help women reach their financial goals. She is also Chair of Ellevate Network, a professional networking community whose mission is to advance women in business. She is one of the highest ranked women ever to have worked on Wall Street, having held posts such as CEO of Smith Barney, CEO of Merrill Lynch Wealth Management, and CFO of Citigroup. She is one of the most-read "Influencers" on LinkedIn, and has been profiled as one of Fast Company's "Most Creative People" in business, as well as in The Wall Street Journal, Fortune, Forbes, and more. Krawcheck attended the University of North Carolina at Chapel Hill and holds an MBA from Columbia University.

1. Own It: The Power of Women at Work

2. Own It: The Power of Women at Work

3. Own It: The Power of Women at Work

Book Description Condition: New. This is a brand new book! Fast Shipping - Safe and Secure Mailer - Our goal is to deliver a better item than what you are hoping for! If not we will make it right!. Seller Inventory # 1XGGTE000P3C_ns

4. Own It: The Power of Women at Work

5. Own It: The Power Of Women At Work (Hardback)

Book Description Penguin Putnam Inc, United States, 2017. Hardback. Condition: New. Language: English. Brand new Book. A Wall Street Journal and Washington Post Bestseller, Own It is a new kind of career playbook for a new era of feminism, offering women a new set of rules for professional success: one that plays to their strengths and builds on the power they already have. Weren't women supposed to have "arrived"? Perhaps with the nation's first female President, equal pay on the horizon, true diversity in the workplace to come thereafter? Or, at least the end of "fat-shaming" and "locker room talk"? Well, we aren't quite there yet. But does that mean that progress for women in business has come to a screeching halt? It's true that the old rules didn't get us as far as we hoped. But we can go the distance, and we can close the gaps that still exist. We just need a new way. In fact, there are many reasons to be optimistic about the future, says former Wall Street powerhouse-turned-entrepreneur Sallie Krawcheck. That's because the business world is changing fast -driven largely by technology - and it's changing in ways that give us more power and opportunities than ever.and even more than we yet realize. Success for professional women will no longer be about trying to compete at the men's version of the game, she says. And it will no longer be about contorting ourselves to men's expectations of how powerful people behave. Instead, it's about embracing and investing in our innate strengths as women - and bringing them proudly and unapologetically, to work. When we do, she says, we gain the power to advance in our careers in more natural ways. We gain the power to initiate courageous conversations in the workplace. We gain the power to forge non-traditional career paths; to leave companies that don't respect our worth, and instead, go start our own. And we gain the power to invest our economic muscle in making our lives, and the world, better. Here Krawcheck draws on her experiences at the highest levels of business, both as one of the few women at the top rungs of the biggest boy's club in the world, and as an entrepreneur, to show women how to seize this seismic shift in power to take their careers to the next level. This change is real, and it's coming fast. It's time to own it. Seller Inventory # AAC9781101906255

6. Own It: The Power of Women at Work

7. Own It: The Power of Women at Work

8. Own It: The Power of Women at Work

9. Own It: The Power of Women at Work