Items related to Vitamin B12 deficiency in clinical practice: "Doctor,...

Vitamin B12 deficiency in clinical practice: "Doctor, you gave me my life back!" 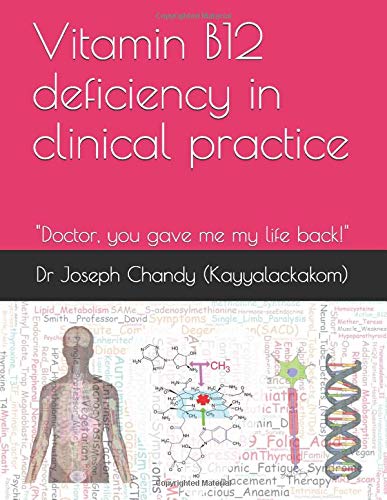 [This is the black and white print version for international markets (non-UK)] - "Dr Joseph Chandy, a practicing doctor for almost 50 years, has written a fascinating and important book. 10 years after starting to practice, Dr Chandy came across a patient with vitamin B12 deficiency who presented with neurological symptoms, but without the characteristic changes in blood cells. In the subsequent 30 years, he dedicated himself in General Practice to identifying and treating patients who had insufficiency of B12. The book vividly described this very human story and the challenges he faced from the authorities who were reluctant to admit that he was making the correct diagnoses. The authorities behaved very badly in prioritising the ‘rule book’ over the clinical symptoms. The book shines throughout with Dr Chandy’s devotion to the well-being of the patient and it should be read by all GPs, in training and those with experience. Medical scientists should also read the book since Dr Chandy ranges across several areas of medicine where much more research is needed. The book is very readable and full of helpful practical information. If the regulatory authorities read the book, it could lead to an improvement in an unsatisfactory aspect of the current practice of medicine."During that time, Dr Chandy observed that* B12 deficiency could occur, and be cured, in people who didn’t have macrocytosis (following the presentation of his observations, university researchers have confirmed this and it’s now common knowledge)* B12 deficiency is far more widespread than previously thought – conditions like MS, ME, anxiety, dementia, and many others may actually be B12 deficiency, and cured by supplementing with Vitamin B12, rather than the cocktail of symptom-suppressing drugs often used today* Every person is unique and different, and treatment should be tailored to the individual. Some people are fine on tablets, some people need injections, some people need injections more than weekly. A blanket “one injection every 3 months” simply doesn’t work for someThe book goes through major human life stages: fertility and pregnancy; neurological disorders; autoimmune disease; neuropsychiatric disorders; cancer and shows, citing published research spanning over 200 years, that Vitamin B12 deficiency is overlooked as a cause of misery and ill-health (and death). And that many people could live much fuller lives if only their doctors recognised this very common condition and treated it correctly. The treatment is very cheap, and very safe. It’s transformative.As well as this black and white version, there is also a colour version which is more expensive

Vitamin B12 deficiency in clinical practice: "Doctor, you gave me my life back!"