Items related to Optimizing America: One Man Will Level the Field: 1...

Jensen, Jarl Optimizing America: One Man Will Level the Field: 1 (The Wolfe Trilogy)

Optimizing America: One Man Will Level the Field: 1 (The Wolfe Trilogy) 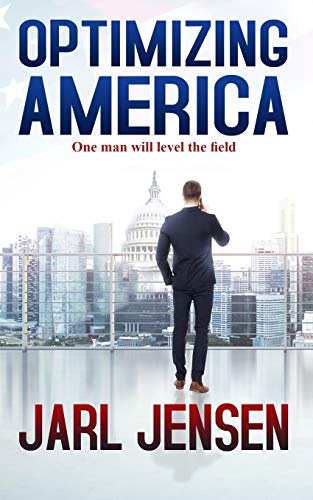 Optimizing America: One Man Will Level the Field (Paperback)

Book Description Paperback. Condition: New. Language: English. Brand new Book. One man will level the field. (Available in audio)You can't expect to win when the system is rigged.Justin Wolfe sets out on a tour to promote 'The Big Solution', his book that outlines a simple economic platform that would turn a corrupt system on its head. Despite the urging from his best friend, Federal Reserve Board hopeful Evan White, Wolfe has no intention of running for office. But when his ideas begin to catch fire with the masses, the two friends find themselves swept up in a presidential campaign that threatens not only their public standing, but their very lives. "Our world is remarkably automated. Resources remain in abundant supply. And by most standard measures, the economy appears to be humming along. Life should be so simple. So prosperous. And yet the vast majority of people still aren't making a decent living. America's promise of equal opportunity has become a distant memory. But I, Justin Wolfe, have a plan to finally change the dynamics that have been holding this country back. Imagine a simple idea that could change the world forever. An idea that will deliver us from this economic train-wreck and prevent further hardships from falling on the shoulders of future generations. Shouldn't we get started?" --Justin WolfeIn a political thriller for the ages, Jarl Jensen achieves something no other author has achieved. He crafts an exciting story around disruptive solutions that would dismantle and rebuild our global economic system. Through vivid scenery, memorable characters, and intense drama, he encourages the reader to ponder hardline questions that challenge modern political punditry, shatter the "news-in-a-loop" cycle, and change the way we think about the distribution of wealth. In this way, this page-turning thriller is more than just a page-turning thriller. It is a means to optimize America, to spark hope for a brighter future, and to change the world forever.REVIEWS"Jarl Jensen entertains and enlightens with one of the clearest explanations of what is broken with the economy and how to fix it. His metaphors help explain the future that rushes towards all of us." -- P.G. Sundling, award-winning author of The Internet President: None of the Above"Author Jarl Jensen has the courage to place before the public a novel that is not only searingly written as a story but also points out the flaws in our current society. This book is not only a fine thriller but it also should be on the Required Reading list for all of us." - - Grady Harp HALL OF FAME TOP 50 REVIEWERWHAT TO EXPECTA well written story that is thought provokingNo action without a purpose, no mind numbing heroics without a causeYour perspective on life, the world and how the future can get better. WILL CHANGE!READER REACTIONS"This book is amazing!" - SJ"Made Me See the Economy of the USA and the World Through New Eyes - Amazing!"How To Make The World A Better Place"From the AuthorThis is a book I had to write. I am an inventor and make a living working with ideas. What do you do with an idea that is more important than the next iPhone? An idea that isn't about a product or a service. It's an idea that will change the world. I decided to write a story that is entertaining, fun and enlightening. As a father of three kids, it's important to me that the future is not apocalyptic. Yet, despite all our technology the future looks worse than ever before in history. I wrote this book to give my kids a better future. Seller Inventory # APC9781097625000

Optimizing America: One Man Will Level the Field (The Wolfe Trilogy)

Optimizing America: One Man Will Level the Field