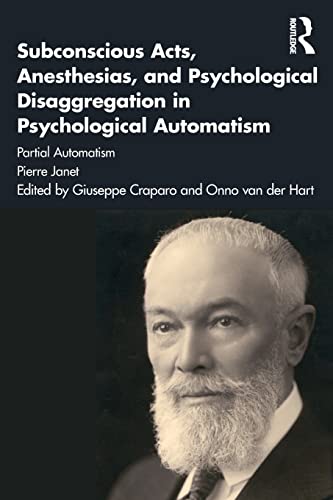 Book Description Paperback. Condition: New. Language: English. Brand new Book. Pierre Janet's L'Automatisme Psychologique, originally published in 1889, is one of the earliest and most important books written on the study of trauma and dissociation. Here it is made available, in two volumes, in English for the first time, with a new preface by Giuseppe Craparo and Onno van der Hart. The second volume, Subconscious Acts, Anesthesias, and Psychological Disaggregation in Psychological Automatism, covers four main topics. Beginning with an examination of subconscious acts, Janet first assesses partial catalepsies, subconscious acts, and posthypnotic suggestions, then proceeds to a consideration of anesthesias and simultaneous psychological existences. This is followed by discussion of several forms of psychological disaggregation, including spiritism, impulsive madness, hallucinations, and possessions. Finally, Janet considers elements of mental weakness and strength, from misery to judgement and will. Janet's work, with its many descriptions of dissociative actions and the dissociative personality, will help clinicians and researchers to develop insight in trauma-related dissociation, and to become more adapt at relating to their patients' dissociative actions.This seminal work will be of great interest to researchers and students of psychoanalysis, philosophy, and modernism, as well as psychotherapists and psychoanalysts working with clients who have experienced trauma. It is accompanied by Catalepsy, Memory, and Suggestion in Psychological Automatism: Total Automatism. Seller Inventory # AAZ9781032056890