Items related to The Shadow of His Smile: Brothers Together In Life...

Benedetto, John; Benedetto, Patricia The Shadow of His Smile: Brothers Together In Life and Song

The Shadow of His Smile: Brothers Together In Life and Song 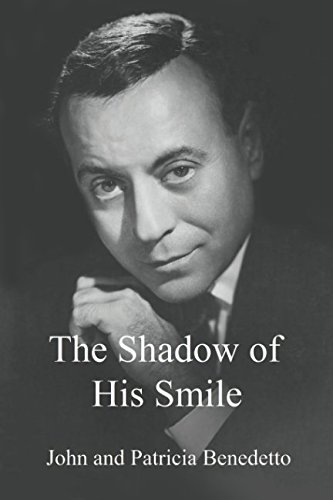 02/05/14 Roseanna Vitro interview titled “Tony Bennett: His Life in Art & Song” What inspired you to become a singer? Did anyone in your family sing? Tony Bennett: I grew up in a very poor time in America during the Great Depression. It was a struggle, and my mom had to work for ‘a penny a dress’ to put food on the table. My father became very sick when I was about nine years old. He had a great reputation because he used to sing in Patagonia, in Calabria, Italy. The family story was that he used to sing on the top of a mountain and the whole valley would hear him. My father’s talent inspired my older brother to study opera. My mom figured out some kind of an arrangement to have him take Italian singing lessons and at age fourteen he was singing solo spots at the Metropolitan Opera. They called him “The Little Caruso” back in the days before television. He was on the Eddie Cantor Radio Show and sang beautifully. I was always influenced by him. I felt that he was getting great training. Later on, he got tired of studying and started going down to the Village where he fell in love with all the jazz artists. I wanted to do whatever he did. I would imitate him. Right away I just fell in love with jazz. He was about four years older than me. His name was John Benedetto. All the Things You Are pg 34 Mary, their sister recalled in the documentary Tony Bennett: The Art of the Singer that “When they formed the band in Germany with the other enlisted men, that’s when I remember Tony saying he’d decided that when he came home, he really wanted to be a singer. Life magazine, Bennett recalled, “It was my brother, an aspiring opera singer, who told me at the very beginning: ‘There’s this singer, a singer of popular songs. He’s really magnificent. His name is Frank Sinatra, and you have to check him out.’ So I went to see him at the Paramount. . ."

1. The Shadow of His Smile: Brothers Together In Life and Song

2. The Shadow of His Smile: Brothers Together In Life and Song