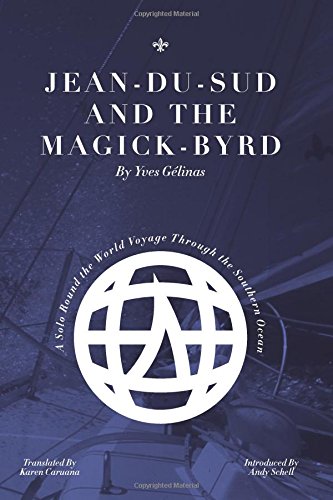 In 1982, filmmaker, inventor & artist Yves Gelinas set out to sail solo & nonstop around the world, via the fabled Great Capes, in his beloved Alberg 30 'Jean-du-Sud.' In the tradition of the early solo solo sailors, Yves' voyage was one of personal discovery as much as physical exploration. He recounts the voyage, which nearly ended in disaster when he was rolled & dismasted near Cape Horn, here for the first time in English, some 30 years after the book was originally published in French. Yves' view on the world is strongly philosophical, and the title of the book is evidence of some of the 'magick' he believes within.

Yves Gelinas is a French-Canadian single-handed sailor and inventor of the Cape Horn wind vane, the simplest, most robust, and most elegant solution for self-steering on an offshore cruising boat. Yves invented and perfected the gear while circumnavigating nonstop via the Great Capes in his beloved Alberg 30 Jean du Sud in the 80s. During that voyage, he filmed 'Around the World with Jean du Sud', which quickly came to be considered the greatest sailing movie ever made. Yves still builds the Cape Horn units himself from his workshop in Quebec & still sails Jean du Sud, most recently voyaging to Martinique in 2015.

Book Description 59 North, Ltd. Paperback. Condition: Good. A copy that has been read, but remains in clean condition. All pages are intact, and the cover is intact. The spine may show signs of wear. Pages can include limited notes and highlighting, and the copy can include previous owner inscriptions. At ThriftBooks, our motto is: Read More, Spend Less. Seller Inventory # G099928780XI3N00

Book Description 59 North, Ltd., 2017. Paperback. Condition: GOOD. Has little wear to the cover and pages. Contains some markings such as highlighting and writing. Supplemental materials are not guaranteed with any used book purchases. Seller Inventory # 099928780X_abe_gd