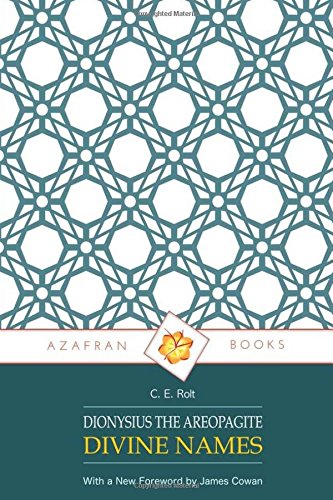 The Divine Names is a seminal text in western thought. This edition is a full-length text - NOT the treatise version. This newly presented version of Dionysius’ Divine Names comes with a specially written Foreword from James Cowan. The Divine Names cemented our relationship with the Neo-Platonic impulse and gave it new meaning in the context of Christian theology. Writers such as Pico di Mirandolo and Marsilio Ficino during the Renaissance are heirs to this impulse. The writings of Dionysius and their mystical teaching was to open the way for such theologians as Duns Scotus Erigena and John of Roosbroec to invigorate Christian thought during the medieval period.Dionysius paved the way for light to become the first principle of metaphysics in medieval Christianity. Reading Dionysius, we find ourselves drawn into a world where metaphysical entities abound. It is a world that we should respect as representing the beginning of our own journey into the very essence of God. NOTE: This edition by Azafran Books was published in January 2018 and has been edited and formatted by a team of dedicated real people – not an algorithm! Our books have been carefully published to the highest of standards.