Items related to If It Wasn't For That Dog

Forester, Michael If It Wasn't For That Dog

If It Wasn't For That Dog 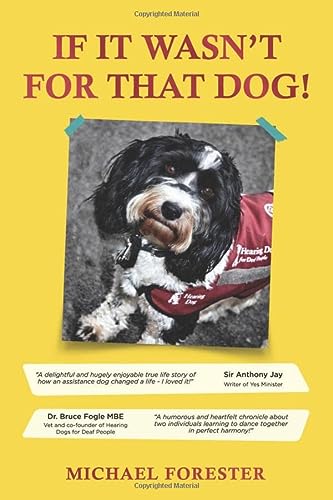 It s amazing what you can achieve with persistence, a bit of chopped liver and a second hand teddy bear... In 2002 Michael, a deafened man from the New Forest, lost his home, his marriage, his business and his father but he can t actually remember if it was in that order. However, in the same year someone suggested that getting a dog might be a good idea not just any dog, but a Hearing Dog from Hearing Dogs for Deaf People. And when, in 2004, Michael was presented with a Hearing Dog of his own called Matt, he just knew life would be so much easier. Amazing how wrong you can be, isn t it! If It Wasn t For That Dog is the story of Matt s first year with Michael, the challenges and accomplishments of climbing the Hearing Dog learning curve, the profound changes he stimulated and the inestimable joy he confers magically on everyone who meets him. But most of all it is the story of the strange power of meaty treats to work miracles in doggie behaviour.

A delightful and hugely enjoyable true life story of how an assistance dog changed a life. I loved it! --Sir Anthony Jay, writer of Yes Minister

Some are born with silver spoons in their mouths. Michael Forester was born with a pen in his hand. Of course, it was immediately pinched by his big brother who put it on a shelf too high for him to reach. He got his own back though. He nicked his brother s abacus and hid behind the sofa with it. Thus his accountancy and entrepreneurial career was born, but always clouded by a nagging suspicion that his true calling had something to do with writing. By the time he was 30 he was finally tall enough to reach the shelf, and took down the pen. This induced a bout of split personality disorder in which he oscillated between pillaging the stock market and writing books teaching others how to make incalculably vast sums of money (one was called Going for Growth and the other, How to Make More Profit). Unfortunately, they didn t make incalculably vast sums of money themselves... The millennium year saw a complete volte-face (millennia can be quite feisty like that, Michael is told still, not to worry, he s fully prepared for the next one) in which he determined to devote his life to poetry, fiction and life writing. The first result was If It Wasn t For That Dog, about his first year with his beloved hearing dog, Matt. (Michael has been severely deafened from the age of 30). In 2009 he won first prize at the Winchester Writer s Festival in the Writing can be Murder category. He has been short/longlisted three times in the Fish Writing Contest. 2016 saw the publication of Dragonsong, an epic fantasy in rhyming verse, following in the tradition of Homer s Iliad and Spencer s Faerie Queen. This was rapidly followed by The Goblin Child, and eclectic collection of short stories. Now at the venerable age of 60 Michael divides his time between Tenerife and the UK. He numbers dryads and angels amongst his closest friends. Michael is blessed with the opportunity of devoting the better part of his time to the pursuit of literary stardom. His children look on aghast as he squanders their inheritance on such profligacies as A4 printing paper and laser toner cartridges. They need have no concern. He plans to leave them the pen.