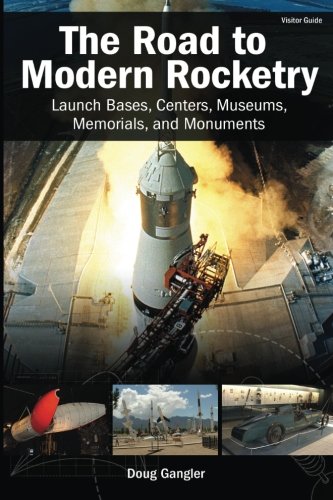 In this riveting book, Doug Gangler brings alive the fast-moving yet intensive history of the modern rocket. Featured are forty-one rocket and space "attractions" spread over the five countries - Germany, France, the United Kingdom, Russia, and the United States - in which the story of the modern rocket occurred. Discussed are: --Russian Konstantin Tsiolkovsky, American Robert Goddard, Austro-Hungarian-German Hermann Oberth, France's Robert Esnault-Pelterie, German-American Wernher von Braun, the Soviet Union's Sergei Korolev, and other great rocketeers. --The German A-4/V-2 which was the critical link to modern rocketry. This wartime rocket was controversial, yet marked amazing technological progress for its era. --The latter 1940s/1950s which saw rocket efforts first aimed at ballistic missiles; major resources and technologies were soon also directed toward developing the great launch vehicles - to this day taking magnificent payloads to space. Pure, fascinating history with a good dose of rocket technology, "The Road to Modern Rocketry" relies on Doug's seamless blending of sources including great publications, archival work, and a superb collection of images, to bring a fresh perspective to rocketry. The present-day launch bases, test/engineering centers, museums, old WW II planned launch bunkers, memorials, rocket/space theme parks, and monuments are an almost unique set of sites telling the incredible, inspirational story of the modern rocket. Let the journey begin! "Doug Gangler's book provides a helpful guide to rocket history, and especially to the sites where modern rocketry and spaceflight were born. Rocket and space enthusiasts will appreciate the many valuable tips to visiting those sites and related museums." Michael J. Neufeld, Author of "Von Braun" and "The Rocket and the Reich" "Excellent guide to events and places across North America and Europe where most important events in rocket history took place in the 20th century. Informative, educational,

Doug Gangler was a career U.S. Naval Officer, after which he ran a tour business for ten years taking clients to the military history sites of Western Europe. It was on the Continent starting with a visit to Peenemuende, then back in the United States and trips to all its incredible rocket and space attractions, that he became highly interested in rocketry. There are many terrific battlefield guides on military history. This book is an attempt to bring a similar amount of detail, organization, and intensity to the story and associated sites of the modern rocket. Doug earned a Masters Degree in Military History from the American Public University System in 2009, also part of the process toward writing "The Road to Modern Rocketry." He an his wife, Roberta, reside in Pennsylvania.

Book Description Champion Books, LLC. Paperback. Condition: Very Good. A copy that has been read, but remains in excellent condition. Pages are intact and are not marred by notes or highlighting, but may contain a neat previous owner name. The spine remains undamaged. At ThriftBooks, our motto is: Read More, Spend Less. Seller Inventory # G0991517709I4N00

Book Description Champion Books, LLC, 2014. Condition: Good. 1st Edition. Shows some signs of wear, and may have some markings on the inside. Seller Inventory # GRP116541370

Book Description Champion Books, LLC. Paperback. Condition: Fair. A readable copy. All pages are intact, and the cover is intact. Pages can include considerable notes-in pen or highlighter-but the notes cannot obscure the text. At ThriftBooks, our motto is: Read More, Spend Less. Seller Inventory # G0991517709I5N00

Book Description Champion Books, LLC, 2014. Condition: Good. A+ Customer service! Satisfaction Guaranteed! Book is in Used-Good condition. Pages and cover are clean and intact. Used items may not include supplementary materials such as CDs or access codes. May show signs of minor shelf wear and contain limited notes and highlighting. Seller Inventory # 0991517709-2-4

Book Description Champion Books, LLC, 2014. Paperback. Condition: VERY GOOD. Pages are intact and are not marred by notes or highlighting, but may contain a neat previous owner name. The spine remains undamaged. Supplemental materials are not guaranteed with any used book purchases. Seller Inventory # 0991517709_abe_vg