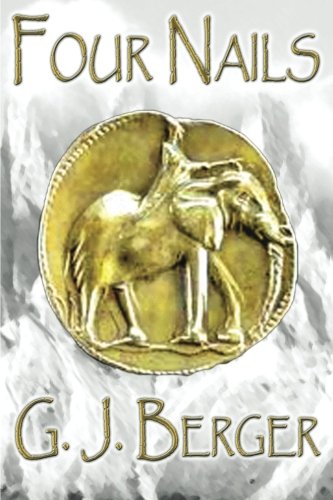 IN ANCIENT INDIA, tragedy strikes a young elephant trainer. Forced into a slave caravan that takes him through perilous lands and into a world at war, Ashoka befriends a special elephant. In a time of constant danger and uncertainty, he finds beauty and kindness when he becomes enchanted by a forbidden tanner's daughter and must help others enslaved for the pleasure of ruthless rulers. To survive this remarkable journey, the elephant trainer calls upon his unique ways with the great greys and a strength known only to those with nothing to lose. "In Berger’s epic historical fiction, a young elephant driver from India fights in Hannibal’s army as it marches toward Rome . . . . "A highly entertaining, sophisticated look at the Second Punic War through the eyes of an unlikely hero."—Kirkus Reviews "Berger's unpretentious prose weaves a brilliant tale of heroism and cowardice, love and heartache through the special relationship between a glorious animal and its trainer."--Sharon Robards, A Woman Transported

G. J. Berger’s debut novel, South of Burnt Rocks West of the Moon, was selected as the best published historical of 2012 by the San Diego Book Awards. “Burnt Rocks” is the sequel to “Four Nails” and tells the mostly true story of the youngest daughter of Sinorix after the empire of Carthage has finally fallen to Rome. G. J. lives in San Diego with his favorite tango dancing partner and grammarian. He reviews for the Historical Novel Society and is working on two other novels. G. J. welcomes hearing from any reader, admirer of elephants, or others interested in this time and place. Contact him at gjberger@hotmail.com.

Book Description G.J. Berger, United States, 2016. Paperback. Condition: New. Language: English. Brand new Book. In ancient India, tragedy leads a young elephant trainer, Ashoka, to perilous adventures in distant lands.On the way, he befriends a special elephant. He and that elephant lead mighty Hannibal's elephant army over the Alps and down the back of Rome. Though a time of constant danger and uncertainty, Ashoka finds beauty and kindness while helping others enslaved for the pleasure of ruthless rulers.To survive this remarkable journey, the elephant trainer calls upon his unique ways with the great greys and a strength known only to those with nothing left to n Ashoka find freedom, or will he and his elephants come to the same bitter end as Hannibal?The hero elephant is real and was ridden by Hannibal himself. The journey was real and reconstructed from ancient writings. The emotion-filled ending is mostly true too. Seller Inventory # APC9780988398245