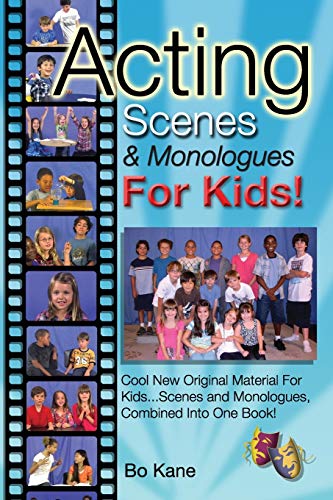 OCTOBER 2019--Revised and updated with additional material added! Cool new original monologues and scenes for kids 5 to 12 years old. Whether a young actor needs a solo piece, or a scene to perform with another actor, this book offers age-appropriate scenes with humor, drama, and crisp dialogue. Included are tips and advice from a professional actor and coach. This book will appeal to boys and girls who are just starting out, and to those with plenty of experience. Young actors will be in familiar territory with universal themes like friendship, trust, and telling the truth ... and tests in school, the animal world, using your imagination, bullying, and sports. This is the companion book to "Acting Scenes And Monologues For Kids! Volume 2" and "Acting Scenes and Monologues for Young Teens".

Bo Kane is a professional actor and acting coach who runs several on-camera acting classes for kids at the On Your Mark Studios in Los Angeles, and directs casting sessions for several casting directors in LA. As an actor, Bo has worked in television, films and commercials, including NCIS, The Orville, How To Get Away With Murder, Colony, Criminal Minds, Castle, CSI, 90210, Dexter, Men Of A Certain Age, Outlaw, FlashForward, and The Unit and films such as The Ringer, Camouflage, and Man Of The House. He began his career in the 80's appearing in such films as El Norte, Child's Play, The Phantom, What's Love Got To Do With It, Born Into Exile ..... and on television in JAG, X-Files, General Hospital, Arli$$, Melrose Place, Magnificent Seven, Bold & Beautiful, Party of Five and many others. Bo and his wife are raising two kids and Bo coaches them in baseball and basketball. He was also the Special Olympic Equestrian Coach for many years. Bo is a graduate of the University of Notre Dame.