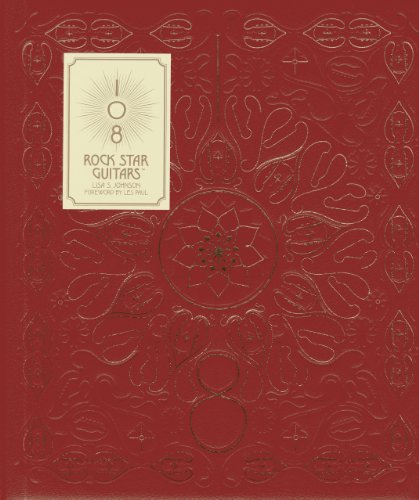 The rich saturation of colour in Lisa Johnson's ground-breaking photographic vision documents not only some of culture's most important rock star guitars, but also recounts how the instrument itself has become the essential symbol of rock. Her bold use of unusually low depth-of-field photography visually caresses the instrument in the way a skilful musician might - zeroing in on subtle gradations in a guitar's patina or hugging the curves of another's silhouette. Johnson accompanies her images with text cultivated from interviews with the proud guitar owners, revealing the personality of the musician who plays the instrument while her images revere the instrument itself. Johnson provides up-close inspection of guitars, including those of Eric Clapton, Les Paul, Jimmy Page, Billy Gibbons, Rick Nielsen, Brian Setzer, Chrissie Hynde, Ace Frehley, Carlos Santana, and Jack White. Here, the guitar is made exotic, sensuous, and evocative - it transforms from an instrument into an artwork.

Most all the guitars heroes are here--Clapton, Richards, Page, Raitt, and 104 others--or rather, their fave axes are. The real star is the imagery: Johnson lovingly captures the bends, curves, worn frets and wild designs on these custom guitars against black seamless. --American Photo Magazine; November/December 2013

Lisa Johnson fell in love with melody and imagery as a result of growing up in an artistic family. She ultimately pursued a career in photography, which includes ten successful years at Eastman Kodak Co. Upon encountering a vintage guitar shop owner in Memphis, Tennessee, however, Johnson began to photograph guitars exclusively. She has resided in both Memphis and New York City, but now lives in Las Vegas, Nevada. Les Paul (1915-2009) was an innovator of the guitar industry, whether as a musician, inventor, or recording artist. In 1941, he built his first solid-body electric guitar and continued to refine this prototype over the years. Through his meticulous work, Les Paul shaped the modern understanding of rock and roll and influenced author Lisa S. Johnson in his backstage conversations with her after his shows. Les Paul died in Mahwah, New Jersey.