Items related to Modernist Cuisine: The Art and Science of Cooking (6...

Modernist Cuisine: The Art and Science of Cooking (6 Volume Set) 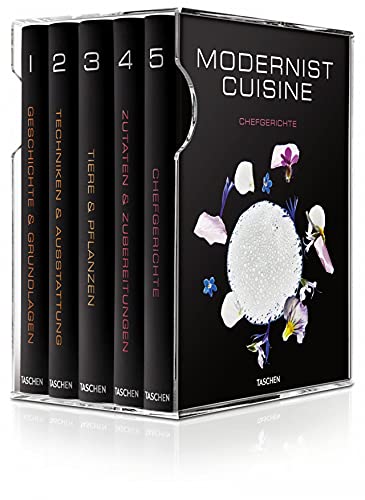 A revolution is underway in the art of cooking. Just as French Impressionists upended centuries of tradition, Modernist cuisine has in recent years blown through the boundaries of the culinary arts. Borrowing techniques from the laboratory, pioneering chefs at world-renowned restaurants such as elBulli, The Fat Duck, Alinea, and wd~50 have incorporated a deeper understanding of science and advances in cooking technology into their culinary art.

In Modernist Cuisine: The Art and Science of Cooking, Nathan Myhrvold, Chris Young, and Maxime Bilet--scientists, inventors, and accomplished cooks in their own right--have created a six-volume, 2,400-page set that reveals science-inspired techniques for preparing food that ranges from the otherworldly to the sublime. The authors and their 20-person team at The Cooking Lab have achieved astounding new flavors and textures by using tools such as water baths, homogenizers, centrifuges, and ingredients such as hydrocolloids, emulsifiers, and enzymes. It is a work destined to reinvent cooking.

How do you make an omelet light and tender on the outside, but rich and creamy inside? Or French fries with a light and fluffy interior and a delicate, crisp crust that doesn't go soggy? Imagine being able to encase a mussel in a gelled sphere of its own sweet and briny juice. Or to create a silky-smooth pistachio cream made from nothing more than the nuts themselves. Modernist Cuisine offers step-by-step, illustrated instructions, as well as clear explanations of how these techniques work. Through thousands of original photographs and diagrams, the lavishly illustrated books make the science and technology of the culinary arts clear and engaging. Stunning new photographic techniques take the reader inside the food to see cooking in action all the way from microscopic meat fibers to an entire Weber grill in cross-section. You will view cooking and eating in a whole new light. A sampling of what you'll discover:

Many invaluable features include:

From the professional chef to the home cook, Modernist Cuisine is an indispensable guide for anyone who is passionate about the art and science of cooking.

Modernist Cuisine is a landmark contribution to the craft of cooking and our understanding of its underlying principles. Its scale, detail, and eye-opening graphics are unmatched by any other book on the subject. It will be an invaluable resource for anyone with a serious interest in cooking techniques, whether the professional innovations of the last few decades or the long traditions on which they build. --Harold McGee

The most astonishing cookbook of our time. --Katy McLaughlin, Wall Street Journal

Big, beautiful, and worth the hype... it is the answer to everything you wanted to know about cooking, not to mention so many things you never thought about. --Andreas Viestad, The Washington Post

DR. NATHAN MYHRVOLD is chief executive officer and a founder of Intellectual Ventures. Before founding his invention company, Myhrvold was the first chief technology officer at Microsoft. He left Microsoft in 1999 to pursue several interests, including a lifelong interest in cooking and food science. Myhrvold competed on a team that won first place in several categories at the 1991 World Championship of Barbecue, including first prize in the special pasta category for a recipe that Myhrvold developed on the day of the contest.

After working for two years as a stagier at Seattle's top French restaurant, Rover's, Myhrvold completed culinary training with renowned chef Anne Willan at the Ecole De La Varenne. In addition, he has worked as Chief Gastronomic Officer for Zagat Survey, publisher of the popular Zagat restaurant guidebooks. Through his many visits to the world's top restaurants, Myhrvold has become personally acquainted with many of the leading modernist chefs and the science-inspired cooking techniques they have pioneered.

Myhrvold's formal education includes degrees in mathematics, geophysics, and space physics from UCLA, and Ph.D.s in mathematical economics and theoretical physics from Princeton University. In his postdoctoral work at Cambridge University, Myhrvold worked on quantum theories of gravity with the renowned cosmologist Stephen Hawking.

CHRIS YOUNG opened the experimental kitchen at The Fat Duck and worked under world-famous chef Heston Blumenthal to oversee development of his most innovative dishes. With degrees in mathematics and biochemistry from the University of Washington, Young oversees original experiments and recipe development for The Cooking Lab.

MAXIME BILET was educated in the humanities at Skidmore College and graduated with highest honors from the Institute of Culinary Education in New York. Before joining the culinary team at The Cooking Lab, Bilet completed stages at Jack's Luxury Oyster Bar, The Fat Duck, and Auberge de l'Ile in London.

1. Modernist Cuisine 1-5 and Kitchen Manual: The Art and Science of Cooking (Hardback)

Book Description The Cooking Lab, United States, 2015. Hardback. Condition: New. Language: English. Brand new Book. Revealing the techniques used for preparing food which ranges from the otherworldly to the sublime, 'Modern Cuisine' is a six-volume guide for anyone who is passionate about the art and science of cooking. Seller Inventory # AA79780982761007

4. Modernist Cuisine: The Art and Science of Cooking (6 Volume Set)

7. Modernist Cuisine: The Art and Science of Cooking

8. Modernist Cuisine: The Art and Science of Cooking (Boxed Set)

Book Description 2011. Boxed Set. Condition: New. Boxed Set. A revolution is underway in the art of cooking. Just as French Impressionists upended centuries of tradition, Modernist cuisine has in recent years blown through the boundarie.Shipping may be from our Sydney, NSW warehouse or from our UK or US warehouse, depending on stock availability. 2400 pages. 23.600. Seller Inventory # 9780982761007

9. Modernist Cuisine: The Art and Science of Cooking (Boxed Set)

Book Description Boxed Set. Condition: New. Boxed Set. A revolution is underway in the art of cooking. Just as French Impressionists upended centuries of tradition, Modernist cuisine has in recent years blown through the boundaries of the culi.Shipping may be from multiple locations in the US or from the UK, depending on stock availability. 2400 pages. 23.600. Seller Inventory # 9780982761007

10. Modernist Cuisine: The Art and Science of Cooking