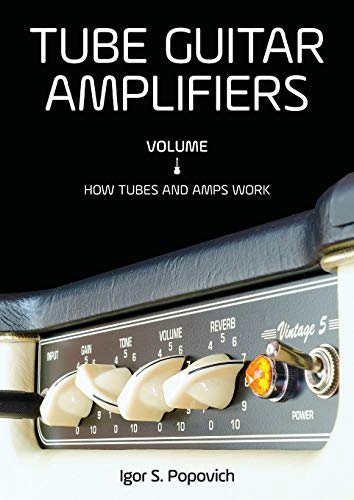 The first three chapters of this unique book cover introductory topics such as basic electronic circuits and passive components (resistors, capacitors, inductors), the building blocks of tube amplifiers. Audio amplifiers are also investigated as “black boxes”, from the outside perspective, and important concepts such as spectra, gain, bandwidth and distortion are introduced.

Chapters four to six explain operational principles behind vacuum tubes (diodes, triodes, tetrodes and pentodes), and their use as rectifiers and active amplification components in guitar amps.

The rest of the book progresses through various stages of guitar amps, from input circuits and preamplifier stages, through tone control circuits and analog effects, to output or power stages.

Various types of negative feedback are explained, together with their benefits and drawbacks. The associated controls such as “Presence”, “Resonance” and “Texture™” are also discussed, using Peavey ValveKing 212 amp as a case study.

Despite claims by their manufacturers, many modern guitar amps aren’t “all tube” at all, but hybrid designs. Most have a single tube in preamp stages to “color” the sound, and a cheap solid state output stage (usually using integrated circuits). Others take the opposite approach, choosing semiconductor preamp stages and a tubed power stage. For that reason solid state (semiconductor) components and amplifiers are covered here briefly, together with two examples of hybrid amps.

This practical DIY manual is richly and professionally illustrated with photographs of tubes, components and amplifiers, circuit diagrams, tube pinouts, curves and loadlines, graphs and charts. These valuable illustrations make it faster and easier to comprehend issues, a picture is truly worth a thousand words! All the information required to design and build tube guitar amplifiers is compiled in one place.

Who is this book for?

· Buyers and sellers of tube guitar amps who need a better understanding of tube technology.

· Electronic technicians and engineers familiar with solid state devices and amps, who want to expand their knowledge of tubes and their circuits.

· Anyone who wants to learn how to design, build, test, fix, or upgrade tube guitar amps.