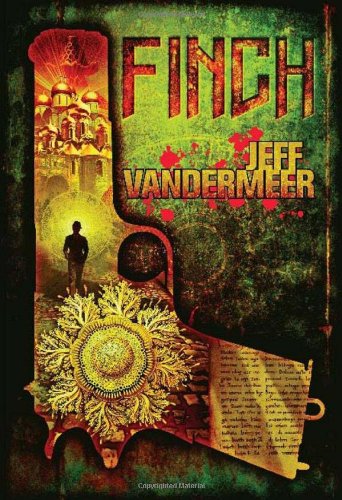 In Finch, mysterious underground inhabitants known as the gray caps have reconquered the failed fantasy state Ambergris and put it under martial law. They have disbanded House Hoegbotton and are controlling the human inhabitants with strange addictive drugs, internment in camps, and random acts of terror. The rebel resistance is scattered, and the gray caps are using human labor to build two strange towers. Against this backdrop, John Finch, who lives alone with a cat and a lizard, must solve an impossible double murder for his gray cap masters while trying to make contact with the rebels. Nothing is as it seems as Finch and his disintegrating partner Wyte negotiate their way through a landscape of spies, rebels, and deception. Trapped by his job and the city, Finch is about to come face to face with a series of mysteries that will change him and Ambergris forever.

Jeffrey Scott VanderMeer is an American writer, editor and publisher. He is best known for his contributions to the New Weird and his stories about the city of Ambergris, in books like City of Saints and Madmen.

From The Washington Post's Book World/washingtonpost.com Reviewed by by Victor LaValle John Finch has been called to a crime scene at 239 Manzikert Ave., Apartment 525. He stands outside the front door, his chest heaving after climbing five flights of stairs. Checks his gun in its holster. The doorknob of Apartment 525 is covered in a light green fungus, but Finch doesn't shudder; he turns it anyway and steps inside, repeating five words to himself: "I am not a detective. I am not a detective." And just that quickly, Jeff VanderMeer's intriguing and highly original novel "Finch" begins. Finch is a detective working in an occupied city decimated by war. The city is Ambergris, a mythical border town occupied by Gray Caps. They're some sort of fungal life, with heads like giant mushrooms -- thus their nickname. These creatures once lived far underground, but they rose to the surface and defeated the human armies. Then the Gray Caps instituted the law of most occupiers: Follow orders or die. Working as a cop in occupied territory, Finch discovers a spectacularly strange double murder in Apartment 525: two bodies -- one human and one Gray Cap. But here's the trick: Both died falling from a great height. Were their bodies dumped? Or could there be another, more complicated explanation? Finch catches the case but doesn't want it. In Ambergris, answers are as dangerous as bullets. "Finch," as should be clear, plays with the conventions of detective novels. Grizzled sleuth? Check. Mysterious woman who brings trouble? At least two. And a plot with more twists than the health-care debate. Despite these trappings, though, "Finch" wriggles from the grip of easy categorization. It's full of fantastical elements and genuinely humane ones, too. VanderMeer can write beautifully, summarizing the deprivations of life in war-torn Ambergris, for instance, with haunting subtlety: "239 Manzikert Avenue was a dark vertical slab of stone and wood with blackened filigree balcony railings crawling up the front. Trees left black leaves and rotting yellow berries on the steps. If the berries had been edible, the steps would've been clean." To a large degree, "Finch" is about life under occupation. VanderMeer writes insightfully about those caught in the middle of war. He makes one think of Baghdad in 2005 or Kabul today. There are rebels, a phantom insurgency more rumor than reality, and there are Gray Caps, but Finch and most other residents of Ambergris shuffle somewhere in between. Early in the novel, Finch recalls something written on the wall of another crime scene: "Everyone's a collaborator. Everyone's a rebel." And this introduces the true concern of the novel: How do you choose sides when both are willing to kill you? In Finch's case, he works as an officer for the Gray Caps. He collaborates with the occupiers. But his past -- and future -- harbors rebellion. Nearly every character teeters along this edge. All the residents jump to whichever side will keep them alive; loyalties may change tomorrow. To complicate matters, there are even old rivalries among the humans: Age-old clan ties that carry the whiff of Sunni vs. Shia, Catholic vs. Protestant. It's a testament to VanderMeer's talent that he suggests such comparisons but never lets them overwhelm the tale. By the end, Finch has chased clues across the city and even across dimensions. His actions are central to the climax, but ultimately he's more witness than participant. The fortunes of Ambergris seem likely to change, but who will really benefit? Civilians caught between warring factions find "victory" a dubious concept. The important questions remain the same: What must I do to survive tomorrow? What will another day of life cost me? The story's final moments may seem triumphant, but this complex novel rejects simple conclusions. bookworld@washpost.com
Copyright 2009, The Washington Post. All Rights Reserved.

Book Description Underland Press, US, 2009. Hardcover. Condition: New. Dust Jacket Condition: New. John Coulthard (illustrator). 1st Edition. The limited first edition, first printing edition publication of Finch by Jeff VanderMeer, called the Heretic limited edition and inscribed by the author. Octavo, 399pp. Green cloth, title in gilt on spine, illustration in gilt on front panel. Stated "First Underline Press Edition" on copyright page with full number line. In publishers limited edition dust jacket, gold foil, limitation printed on rear, in fine condition. This unique limited edition is inscribed on the dust jacket, with the limitation (#79) on the rear panel. Inscription reads: "The camps were unknown to Finch.Second hand accounts. People came back transformed, as if experimented on and their families often wouldn't accept them. Jeff VanderMeer." Accompanied by a CD, covering letter from the publisher dated Year 801, a wax seal and a chapbook Proto-Finch - Finch before Finch - all items in fine condition. (NB - at the time of listing this title, the sister book "Shriek" is also available in limited edition format. This work by Jeff Vandermeer was a nominee for the 2010 World Fantasy Award for best novel. His first novel, Annihilation, won a Nebula Award and the Shirley Jackson award. Inscribed by Author(s). Seller Inventory # 002116