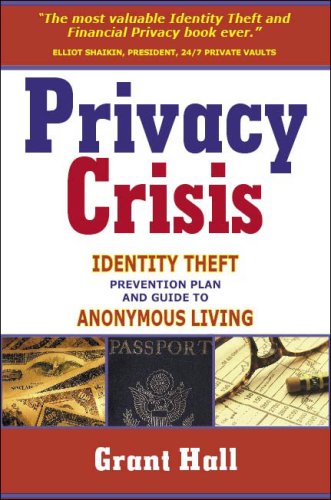 Author and privacy expert, Grant Hall's book, PRIVACY CRISIS: Identity Theft Prevention Plan and Guide to Anonymous Living provides readers with proven principles and concepts designed to enable anyone to travel, bank, work and live anonymously.Whether your goal is to avoid America's fastest growing crime, identity theft or escape from a dangerous and troublesome stalker, this book will provide a gateway to personal freedom and privacy.Through the use of alternate identification, the "freezing" of credit bureau files and the proper use of business entities and trusts, an American business person can disappear-legally while preserving their personal and business privacy-legally in the U.S.A.Establish a totally private means of traveling through the use of a trust owned vehicle-properly registered according to Hall's methods.Make money and assets disappear while maintaining full control and management of all property-in the U.S.A.Privacy seekers can avoid identity theft, utilize an alternate I.D.-for privacy purposes, live in a home with no ties to their true name, travel under the radar, establish a totally secret communication system and manage all personal money and business investments secretly.It's possible to do business and work in total secrecy. Entities may be the holders of business property and become your "employer" as you work in a traditional business, occupation, trade or profession.

During the 1980's, Grant Hall managed cases and coordinated services for insurance claimants who sought settlement awards for injuries and illnesses. Hall especially studied the practices of certain claimants who avoided being "tailed" or followed by evidence-gathering investigators.Hall holds a master's degree from an American university-although he won't say which one.A practitioner of the privacy lifestyle, Hall once "disappeared" for four years when counsel advised him to avoid the service of a summons for what his attorney described as "an expensive case to defend," and one "without merit." Although he was hunted by investigators from three states over a four-year period, Grant Hall was never found.PRIVACY CRISIS was spawned by Hall's anonymous life on the lam.Following years as an individual investor and stock trader, Hall has managed assets for three businesses. He currently manages a business in the United States and another in Europe-somewhere.A long-time student of the stock market, he has been a featured guest speaker at investment seminars and also has appeared on television and radio programs.

Privacy Crisis? Easy to believe if you've ever had your identity stolen (America's fastest growing crime). Or if you've ever had snoops rifling through your most personal computer information, or investigators trying to track you down for something you never did.To say nothing of being hunted by an obsessive stalker, discovering that your phones are subject to government wiretaps, that your e-mail is being monitored, or that you're the target of scam and con artists.Your identity, your personal life, is your business-and no one should be invading it without your permission. If you want to protect your personal privacy and freedom, this book can tell you exactly how to do it.Threats to privacy are growing rapidly. In the name of "security," government intrusions into personal privacy are unprecedented and will only increase. Meanwhile, common criminals are finding, in identity theft, their own personal gold mine. Banks and merchants pry ever more deeply into your personal affairs before they will do business with you.Don't be a victim. Don't be a doormat. Protect yourself.Take back your personal freedom. This book is your guide.