Items related to Eternal Husband, The (Art of the Novella)

Fyodor Dostoevsky Eternal Husband, The (Art of the Novella)

Eternal Husband, The (Art of the Novella) 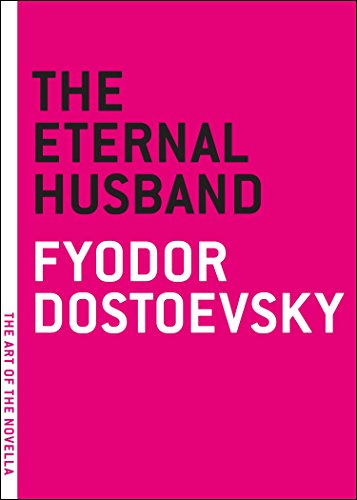 This remarkably edgy and suspenseful tale shows that, despite being better known for his voluminous and sprawling novels, Fyodor Dostoevsky was a master of the more tightly-focused form of the novella.The Eternal Husband may, in fact, constitute his most classically-shaped composition, with his most devilish plot: a man answers a late-night knock on the door to find himself in a tense and puzzling confrontation with the husband of a former lover-but it isn't clear if the husband knows about the affair. What follows is one of the most beautiful and piercing considerations ever written about the dualities of love: a dazzling psychological duel between the two men over knowledge they may or may not share, bringing them both to a shattering conclusion.

"Small wonders"
--Time Out London
"I wanted them all, even those I'd already read."
--Ron Rosenbaum, The New York Observer

"I wanted them all, even those I'd already read."
--Ron Rosenbaum, "The New York Observer"

"I've always been haunted by Bartleby, the proto-slacker. But it's the handsomely minimalist cover of the Melville House edition that gets me here, one of many in the small publisher's fine 'Art of the Novella' series."
--"The New Yorker"

"The Art of the Novella series is sort of an anti-Kindle. What these singular, distinctive titles celebrate is book-ness. They're slim enough to be portable but showy enough to be conspicuously consumed--tiny little objects that demand to be loved for the commodities they are."
--KQED (NPR San Francisco)

"Some like it short, and if you're one of them, Melville House, an independent publisher based in Brooklyn, has a line of books for you... elegant-looking paperback editions ...a good read in a small package."
--"The Wall Street Journal"

DOSTOEVSKY'S SHORT MASTERPIECES BROUGHT TOGETHER IN A BRILLIANT NEW TRANSLATION

The Eternal Husband and Other Stories brings together five of Dostoevsky's short masterpieces rendered into English by two of the most celebrated Dostoevsky translators of our time. Filled with many of the themes and concerns central to his great novels, these short works display the full range of his genius. The centerpiece of the collection, the short novel The Eternal Husband, describes the almost surreal meeting of a cuckolded widower and his dead wife's lover. Dostoevsky's dark brilliance and satiric vision infuse the other four tales with all-too-human characters, including a government official who shows up uninvited at an underling's wedding to prove his humanity; a self-deceiving narrator who struggles futilely to understand his wife's suicide; and a hack writer who attends a funeral and ends up talking with the dead. The Eternal Husband and Other Stories is sterling Dostoevsky -- a collection of emotional power and an uncompromising insight into the human condition.

1. The Eternal Husband (The Art of the Novella)

2. The Eternal Husband (The Art of the Novella) [Paperback] Dostoevsky, Fyodor and Garnett, Constance

3. THE ETERNAL HUSBAND (THE ART OF

4. The Eternal Husband (The Art of the Novella) [Paperback] Dostoevsky, Fyodor and Garnett, Constance

5. THE ETERNAL HUSBAND (THE ART OF

6. The Eternal Husband (The Art of the Novella)