Items related to Dear Dad: Where's the Family in our Family Today?

Dear Dad: Where's the Family in our Family Today? 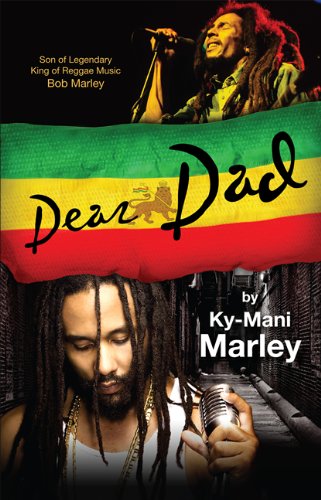 The Marley surname perpetuates Jamaican royalty, resonates from worldwide recognition and represents the pioneer of a cultural, political and social revolution.

In the near-thirty years since the death of the world's greatest reggae-music icon, music lovers, truth seekers, and a new generation of social-activists alike have flocked to the musical catalog of Bob Marley like new believers on a pilgrimage for soul inspiration. Though Marley's iconic life was cut short before his time, his legacy lives on as vibrantly as it did when he walked among us. This is not only true because of his timeless music, but because of the musical genius of the extraordinary children he left behind.

Born in Falmouth, Jamaica in 1976 as the tenth son of legendary reggae icon Bob Marley, Ky-Mani Marley discovered his musical talents late in life, rising to become an international music artist and film actor. Ky-Mani has not only written and performed songs of redemption around the world, like his famous father, but has lived and survived to recant his own personally redemptive story in the face of some very stark urban realities unbefitting any human, let alone a 'Marley.'

Dear Dad, is an arresting narrative of a son locked out of his iconic father's shelter for the first half of his life and forced to survive the poverty-stricken, predator-infested streets of one of Miami's most violent ghettos, Liberty City. Initially estranged from his siblings and cut off from any financial benefit of the Marley Estate, young Ky-Mani's gritty ascent from a bullet-riddled life to the world stages he now commands as a Grammy-nominated recording artist are chronicled in this gripping biography.

Today a dedicated father and family man traveling to all corners of the world, performing no less than 100 shows per year, Marley knew he¹d reached a plateau of transformation in his life when he was named 'Philanthropist of the Year' by the Prince Albert II of Monaco Foundation, Better World Awards.

His life is truly a 'redemption song.'

"If it meant I had to sell all the drugs in America, then that's exactly what I was going to do."
Family ties are the ties that bind, but when unraveled, they can be the threads that nearly hang us to death. In fact, sometimes our most vehement enemies emerge from the same sources from which we yearn to receive so much love—our families.
Ky-Mani Marley knows this firsthand. As he says, 'Family politics can be a straight bitch.' Although born the tenth child of Bob Marley, Ky-Mani grew up estranged from his internationally renown family—without the power, wealth, and influence they enjoyed. Ky-Mani says, ' ... when I would visit my siblings, it was like night and day.' He goes on, 'I'd be coming back home [from Kingston] from two weeks of helpers, cooks, gardeners, and a lawn man to bathing and cooking outside in our front yard [in Falmouth, Jamaica].'
Never fully included in the Marley Family, things only worsened after his father's untimely death. Ky-Mani was completely locked out of his iconic father's shelter. He was forced to survive the impoverished and predator-infested streets of one of Miami's most violent ghettoes, determined to stay alive any way he could. 'This is not the life I would have had to live if he were here—my dad,' Ky-Mani says.
This compelling narrative chronicles young Ky-Mani's gritty ascent out of the bullet-riddled life of street conflict and crack selling. An internationally known recording and performing artist, Ky-Mani shares his own story of personal redemption through his music, writing about his experiences, his struggles, and what he has survived to make it to the world stages he now commands as a Grammy-nominated musical artist and philanthropist.
THE STORY THE MARLEY FAMILY APPARENTLY DOESN'T WANT YOU TO KNOW
This memoir is the book the Marley Family tried to stop. By legal standards, they committed tortious interference as an attempt to stop it from going into print and to censor the author from telling his story. You now have in your hand that story in its uncensored form.
"'The harder the battle, the sweet of Jah victory." -- Bob Marley

Ky-Mani Marley, is a Grammy nominated reggae-music artist, film actor and son to legendary reggae icon Bob Marley. Born in Falmouth, Jamaica in 1976, his road to the world stage was wrought with challenge and even poverty growing up on the streets of Miami, Florida. Estranged to his 10 other siblings and family fortune early in his life, Ky-Mani fatefully discovered his inherent musical talent and arose to record 4 critically acclaimed albums, including the mega-hit entitled "Dear Dad." Marley now is a father, family-man and sought-after reggae artist traveling to all corners of the world doing no less than 100-shows a year world-wide.
'Che Guevara, Jim Morrison, John Lennon, Bob Marley, The Beatles -- these are names that refuse to fade out. No generation gap can lower their popularity. They will always remain a symbol of youth.'