Items related to 50 People of East London, The

50 People of East London, The 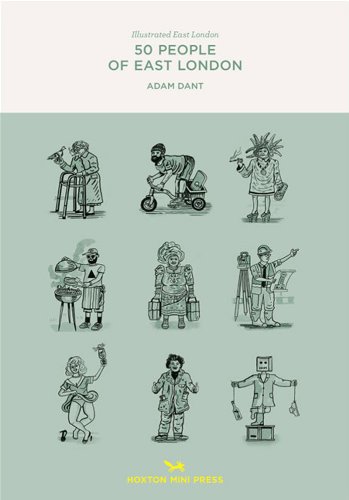 Madeleine Waller's portraits of swimmers - both dressed and in their swimsuits - are set against personal stories that reveal the inner life of people who escape the city to swim in all conditions.

Originally from Australia, Madeleine Waller has been living and working in London since 1987. After studying photo-journalism at London College of Printing, Madeleine began her photographic career working for newspapers and magazines on a broad range of assignments. Her work has been featured in The Sunday Telegraph, The Independent, The Independent Magazine and Marie Claire among others. Waller's personal projects, such as Urban Swimmers, have been exhibited across the UK as well as in The National Portrait Gallery, London.

Book Description Hoxton Mini Press, 2019. Condition: Good. Ships from the UK. Former Library book. Shows some signs of wear, and may have some markings on the inside. Seller Inventory # 17547585-6

Book Description -. Hardcover. Condition: Very Good. 50 People of East London, The This book is in very good condition and will be shipped within 24 hours of ordering. The cover may have some limited signs of wear but the pages are clean, intact and the spine remains undamaged. This book has clearly been well maintained and looked after thus far. Money back guarantee if you are not satisfied. See all our books here, order more than 1 book and get discounted shipping. Seller Inventory # 7719-9780957699816

Book Description Hoxton Mini Press, 2013. Hardcover. Condition: Used; Good. **Simply Brit** Shipped with Premium postal service within 24 hours from the UK with impressive delivery time. We have dispatched from our book depository; items of good condition to over ten million satisfied customers worldwide. We are committed to providing you with reliable and efficient service at all times. Seller Inventory # 2569599

Book Description Hoxton Mini Press, 2013. Hardcover. Condition: Used; Good. **SHIPPED FROM UK** We believe you will be completely satisfied with our quick and reliable service. All orders are dispatched as swiftly as possible! Buy with confidence!. Seller Inventory # 2273568

Book Description Paperback. Condition: Very Good. The book has been read, but is in excellent condition. Pages are intact and not marred by notes or highlighting. The spine remains undamaged. Seller Inventory # GOR006642479