Items related to Arsenal - The French Connection: How the Arsenal Became...

Arsenal - The French Connection: How the Arsenal Became L'Arsenal 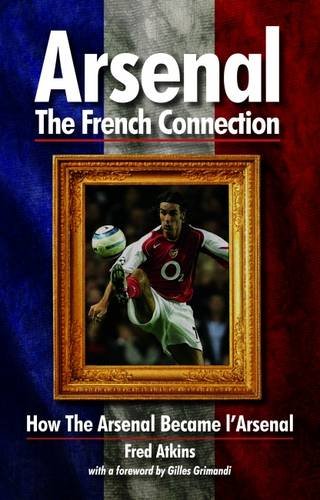 THE Royal Arsenal, for most of its existence, produced weapons destined to kill Frenchmen. In 1886 its workers formed a football club that would become one of the most powerful in England, but it was a Frenchman who a century later turned Arsenal into one of the most popular teams in France - and the world. Arsenal's French Evolution is the story of the men behind this transformation, especially Arsene Wenger, whose father cheated death on the Russian front and who himself had to battle corruption and match-fixing in French Football before becoming one of the world's greatest managers. This book, which doubles as a potted history of French football, has profiles of every French Arsenal player, including detailed chapters on Emmanuel Petit and the mutliple tragedies he endured, the circus that surrounded Nicolas Anelka and the bizarre rage of William Gallas. Read about the mercenaries, the players who didn't make it, the unsung heroes like Sylvain Wiltord and above all relive the greatness of Petit, Thierry Henry, Robert Pires and Patrick Vieira.

'Lifelong Gooner Atkins' detailed trawl through Wenger's career is laced with humour drier than a bottle of Cabernet Sauvignon, revealing a fine appreciation of both the game and our relationship with our cross channel freres.' Four stars. FourFourTwo Magazine, November 2012

Fred Atkins was born in Maidstone in 1973 and spent much of his formative years at Maidstone United’s Athletic Ground. He attended Oakwood Park Grammar School, Sussex University and the Institut d’Etudes Politiques in Strasbourg. After graduation he drifted into the arena of unemployment and barely noticed a difference. He then spent three years as an English teacher, in his words “teaching foreign students how to swear”, before stumbling into journalism with the Maidstone News. He became sports editor of the Kent Messenger and went on to work for the Associated Press, covering the England cricket team for five years, including two Ashes series and the 2009 Twenty20 World Cup. He now works as a copy writer and as the media manager and website editor for the Lashings All-Stars cricket team. Fred is the author of three books. “The Double, the story of Maidstone United’s 2001-2002 season”, followed by “Tour de Kent” (published by Breedon Books in 2009) and “Arsenal: The French Connection” (published by GCR Books in 2012). He compiled “The Arsenal Quote Book”, to be published in autumn 2016. Fred also edited “Stuck In A Moment” by Stewart Taylor, which was longlisted for the 2014 William Hill Award. His first novel, “Welcome to Kent” will be published during the 2016-17 season. He lives in Allington with his wife Wendy and daughter, Sylvia.

1. Arsenal - The French Connection: How the Arsenal Became L'Arsenal

Book Description Paperback. Condition: Very Good. The book has been read, but is in excellent condition. Pages are intact and not marred by notes or highlighting. The spine remains undamaged. Seller Inventory # GOR005098338

2. Arsenal - The French Connection: How the Arsenal Became LArsenal

Book Description GCR Books, 2012. Hardcover. Condition: Used; Good. **SHIPPED FROM UK** We believe you will be completely satisfied with our quick and reliable service. All orders are dispatched as swiftly as possible! Buy with confidence!. Seller Inventory # 2010122