Pennington, Peter Reginald William Wood's Diary: A Story of Nineteenth Century Emigration on Board the Sailing Ship "Constance" in 1852

William Wood's Diary: A Story of Nineteenth Century Emigration on Board the Sailing Ship "Constance" in 1852 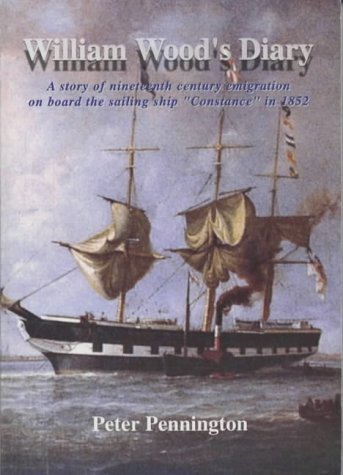 In 1852 William Wood and his wife Sarah and baby son sailed from England to Australia in the emigrant ship "Constance".
For every day of the three month voyage William wrote up his diary and through it's pages we can read of happy and sad events, of wild parties and tragedies. We read of conditions on board that were so typical of those endured by migrants from all over Europe when they sailed to the "new" countries of North America, Australia, New Zealand and elsewhere.

William was a well educated person - unusual for his social class at the time - and he gives us a unique description of conditions amongst the lowest "steerage" class passengers. From the food eaten to the sale of liquor by the captain and crew we read it all and are easily transported back to those days under canvas.

Around a very personal diary Peter has written an excellent explanation of the situation in Europe during the first half of the Nineteenth century and what motivated so many to seek a new home in lands far away.

The book also has much to appeal to the maritime historian with descriptions of the "Constance" itself and of other ships sighted at sea and whose journeys may otherwise be lost in the mists of history.

There are passenger lists for those with relatives who may have also sailed with William and also a piece about the famous steamship "Great Britain" on which William made a subsequent voyage once again from England to Australia.

This book is both a contribution to the social history of the period and a first class read for all who are interested in ships and migration in the period.

Peter is a retired company executive, married with two adult children.He is descended from the sister of William's wife Sarah.