Items related to I Kicked the Devil in the Shins

Byrne, Mark I Kicked the Devil in the Shins

I Kicked the Devil in the Shins 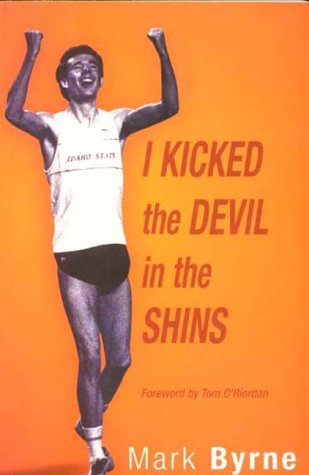 This paperback autobiography is the story of Mark Byrne. At twenty-eight he was working as a Physical Education teacher and had run internationally for his country at 800 metres. The book charts the characters and events of his life especially around the years when he was diagnosed and underwent treatment for Non Hodgkin's Lymphoma. A humorous and inspiring story, it will make you laugh and cry. Fifty black and white photographs depict images from childhood, races, life in hospital after a bone marrow transplant and his present day health. It is a book full of twists and turns and it will keep you entertained and turning pages to the end. There is light at the end of the tunnel.

An open and often humorous account autobiographical account of his fight against lymph cancer and the resulting loss of his Olympic career, the book could well find its way on to the bestseller lists. -- The Wicklow Times September 21st

Byrne's is an uplifting tale of courage in the face of adversity and should be mandatory reading for anyone who thinks their life is bad. Catherina McKiernan says: 'An amazingly honest and touching book. It will help you believe in the power to overcome adversity. -- Sunday Tribune September 17th

His frank account is told with humour and honesty and relates his passion for running, even during treatments he carried on teaching and training as much as he could to give his life some normality. -- Herts and Essex Observer September 21st

Ironically, at about the time that Mark Kennedy and Phil Babb were getting into character for last Monday night's episode of Starky and Hutch on Harcourt street, I read a chapter in a splendid new book which may have promted them to give car bonnets a miss. The book is the autobiography of former international athlete Mark Byrne. His book takes the reader through many traumatic days yet it is a tale of triumph. Inspired by Byrne's infectious optimism, I can't help wondering if the Republic of Ireland side will give the nation a lift in Amsterdam tonight. -- Saturday Independent September 2nd

Record of a true Champion. Marathon Olympic silver medallist John Treacy described it as "a gripping story of human courage and triumph." I'd say it's more than that. It's an inspiration to everybody, including those who have remained healthy enough to compete in Australia. And it's a cracking read. -- The Sun September 7th

The athlete who won race against cancer. He has put an amazing story down on paper. -- The Star

The book isn't just a funny, honest and deeply personal look at what it means to get cancer. Young athletes should pay heed to his tale of getting an American scholarship, having four productive years in the USA and then struggling to come to grips with real life afterwards. -- Evening Herald September 16th

When people like Mark get cancer and beat it, they perform a role similar to that of our elite sportsmen and sportswomen: they come to represent many of our hopes and fears; they go to places few of us will visit, and when they come back, however extraordinary their adventures, they tell us something about our common humanity. For this reason, there is nothing depressing about Mark Byrne's story. It may be sad in parts and painful in others, but shining through is the decency, courage, and dignity of an ordinary man as he is forced to grow up swiftly and brutally. -- The Irish Runner Magazine October 2000

Born and educated to secondary level in Dublin, Ireland. Went to America for five years on an athletic scholarship. Graduated with an Honours Bachelor of Science degree in Physical Education and History. Won five Big Sky titiles and two university records still stand. Worked in Hertfordshire, England, as a secondary teacher while representing Ireland at 800 metres and ran for Harringey club in London. Ranked number one in the country in 1988, and second in1989. Wrote I kicked the Devil in the Shins following a bone marrow transplant for Non Hodgkin's Lymphoma. HOBBIES & INTERESTS Sport is my passion. I also enjoy reading, writing, watching movies and travelling. I am a confident enthusiastic individual with plenty of experiences from the School of life. I am outgoing, and have a lively personality. I plan to write another book and a screen play. Most importantly I live each day to the max and am grateful to be alive. Never give in and Kick the Devil in the shins each and every day.

1. I Kicked the Devil in the Shins

2. I Kicked the Devil in the Shins

Book Description On the Edge Books, 2001. Paperback. Condition: Very Good. The book has been read, but is in excellent condition. Pages are intact and not marred by notes or highlighting. The spine remains undamaged. Seller Inventory # GOR001523220

3. I Kicked the Devil in the Shins

Book Description On the Edge Books, 2001. Paperback. Condition: Good. The book has been read but remains in clean condition. All pages are intact and the cover is intact. Some minor wear to the spine. Seller Inventory # GOR001810966

4. I Kicked the Devil in the Shins