Items related to Driving Over Lemons: An Optimist in Andalucia

Stewart, Chris Driving Over Lemons: An Optimist in Andalucia 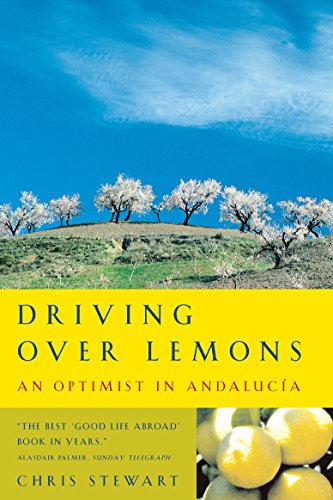 Meet Chris Stewart, the eternal optimist. At age 17 Chris retired as the drummer of Genesis and launched a career as a sheep shearer and travel writer. He has no regrets about this. Had he become a big-time rock star he might never have moved with his wife Ana to a remote mountain farm in Andalucia. Nor forged the friendship of a lifetime with his resourceful peasant neighbour Domingo...not watched his baby daughter ChloÙ grow and thrive there...nor written this book. Fate does sometimes seem to know what it’s up to. Driving Over Lemons is that rare thing: a funny, insightful book that charms you from the first page to the last...and one that makes running a peasant farm in Spain seem like a distinctly gd move. Chris transports us to Las Alpujarras, an oddball region south of Granada, and into a series of misadventures with an engaging mix of peasant farmers and shepherds, New Age travellers and ex-pats. The hero of the piece, however, is the farm that he and Ana bought, El Valero – a patch of mountain studded with olive, almond and lemon groves, sited on the wrong side of a river, with no access road, water supply or electricity. Could life offer much better than that?

All Provenced out? Then head further south, to the breathtaking mountainous climes of Andalucia. Just don't be squeamish about driving over lemons. Chris Stewart, skilled sheep-shearer and sometime Genesis drummer, took one look at the Alpujarrßs, the foothills of the Sierra Nevada, and decided that's where he wanted to be. This is the story of his adventures coming to terms with the terrain, the lifestyle and, of course, the locals, who possess all the rugged, homespun charm you'd expect. Stewart soon discovers all the hidden foibles of his bargain purchase, and spends the following year (rendered here in detail) installing the little luxuries of life like, say, water.

However, just when you're worrying that all this might degenerate into a rose-tinted Englishman-finds-nature idyll, Chris's wife enters the fray. Nonsense-free, straight-talking and relentlessly unsentimental, Ada should be a required resource for all travel writers. Ada gets bored with the fake machismo of pig-killing, Ada sees through the selfless "help" of the natives, Ada calls a peasant a peasant. With her on board, Stewart has the perfect counterbalance to his declared optimism, and Driving over Lemons becomes a loving but clear-sighted encomium, economically and wittily written, to a wonderful part of the world. --Alan Stewart

A wonderful book - funny, affectionate, no hint of patronage, a true portrait of place, and people, reaching deep beneath the skin. Tuck it into your holiday luggage and dream. (Elizabeth Luard Daily Mail)

Exquisite ... in Driving Over Lemons the anecdote
flourishes once more, Stewart's briskly robust style
and lack of pretension keep the book rolling along

A humble and enchanting account...Chris Stewart is one of life's bold originals. (Christina Hardyment Independent)

A lyrical portrait of a couple integrating themselves into one of Europe's most beautiful regions. Stewart's writing conveys his amiability...and he has a particularly good ear for dialogue. (Anthony Sattin Sunday Times)

When an author is as modest and humorous as this, his story cannot be told too often. (Elizabeth Buchan The Times)

A funny, observant and personal account of what a man can learn, and what there is to appreciate in life. Marvellous. (John S. Doyle Sunday Tribune)

DRIVING OVER LEMONS: AN OPTIMIST