Items related to Someone at a Distance

Dorothy Whipple Someone at a Distance

Someone at a Distance 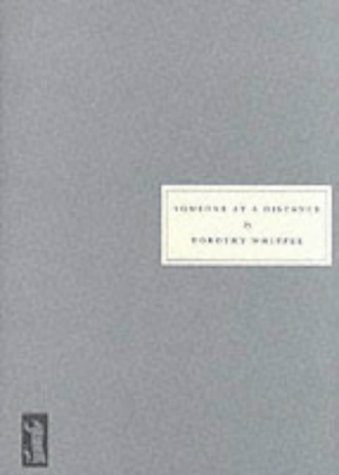 International Law: As Interpreted During the Russo-Japanese War (1907)

Someone at a Distance (1953) was the first novel by Dorothy Whipple Persephone Books published, although it was the last she wrote. We chose it because we think it is her best, an outstandingly good novel by any standards. Apparently a 'fairly ordinary tale about the destruction of a happy marriage,' Nina Bawden wrote in her Preface, yet 'it makes compulsive reading' in its description of an 'ordinary' family, husband commuting up to town, wife at home ('Ellen was that unfashionable creature, a happy housewife'). Disaster strikes when a young French woman visits (the scenes back in France are most beautifully described, with touches of Balzac or Maupassant) and calculatingly seduces the husband. He abandons everything for her; then there is no going back.

The effect on his wife and children, on his partner at work, the way his life is destroyed in an instant of mid-life madness, all combine to create a novel of exceptional insight. This is a strongly moral book, which shows Ellen as a fulfilled yet dangerous innocent, with a touch of smugness which blinds her to her husband's vanity. Yet neither of them are more smug, or more vain, than anyone else...which is why the novel has a universal quality lifting it out of the realm of the commonplace.
Dorothy Whipple is a superb stylist: not a 'fine' writer or a Modernist but a calm intelligence in the tradition of Mrs Gaskell and George Eliot. The first sentence, with its overtones about the tragecy to come, encapsulatges the novel's quality: 'Widowed, in the house her husband had built with day and night nurseries and a music-room, as if the children would stay there for ever, instead of marrying and going off at the earliest possible moment, old Mrs North yielded one day to a long-felt desire to provide herself with company. She answered an advertisement in the personal column of The Times.'
'The prose is simple, the psychology spot on' said the Daily Telegraph, while the Spectator called it 'a very good novel indeed about the fragility and also the tenacity of love.' Someone at a Distance was in the Evening Standard bestseller list, propelled there in part by the enthusiasm of John Sandoe's bookshop in Sloane Square, which commented in its booklist: 'We have all delighted in this unjustly forgotten novel; it is well written and compelling.' Someone at a Distance has now become one of Persephone Books' quiet bestsellers.

Born in 1893 in Lancashire, England, Dorothy Whipple wrote nine extremely successful novels, two of which were made into films. She also wrote short stories and two volumes of memoirs. She died in 1966. Nina Bawden is the celebrated author of Carrie's War, Peppermint Pig, and The Witch's Daughter, among others. A number of her works have been dramatized by BBC Children's television. She currently lives in London and Nauplion, Greece.

1. Someone at a Distance NEW Edition

2. Someone at a Distance (Paperback)

3. Someone at a Distance (Paperback)

4. Someone At A Distance

5. Someone at a Distance

6. Someone at a Distance NEW Edition