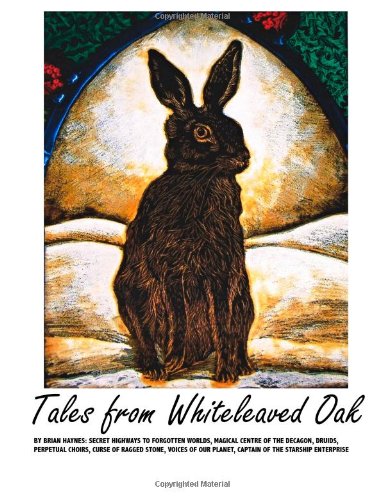 Naked girls draped themselves over the Venetian furniture wearing nothing but partial suits of armour. Others paraded their bodies in front of Flemish tapestries. A photographer from German Playboy magazine was taking pictures in near-by Eastnor Castle. So begins one of the tales from the hamlet of Whiteleaved Oak that nestles in a fold of the Malvern Hills in Herefordshire. Ancient tales of mystery and mistletoe have been told since the times of the Druids and their sacrifices in our hamlet, 3,000 years ago. Recent gossip and innuendo have continued this legacy of stories into modern folklore. During the 40 years I’ve lived here, I’ve welcomed a procession of often spiritually challenged visitors. They’ve included: dowsers, Druids, pagans, witches, faeries, Native American Indians, the Extra Terrestrial Ambassadors, a BBC sports presenter who warns we’re being taken-over by alien lizards, and actor Patrick Stewart who played Jean Luc Picard - Captain of the Starship Enterprise. Mayan astrologers, whose calendar soon runs out, tell me to expect the end of the world - possibly before next Christmas. These strange events mingle with the SAS who drop in by helicopter from time to time, to train in the woods around our cottages Tales from Whiteleaved Oak, at the centre of the 10 sided medieval decagon, describe secret highways to forgotten worlds. Perpetual choirs will warn of the impending disaster of global warming. As sea levels rise and mass extinction takes hold, the last pair of mating humans driven north by the searing temperature will seek sanctuary in the semi-tropical Arctic.

Brian Haynes was born in 1939. He worked for the Sunday Times and in current affairs television before moving to the hamlet of Whiteleaved Oak where he has lived for the last 40 years. During that time he realised the extraordinary relationships going on between hamleteers and the events they caused were actually pieces of modern folklore. Just like stories from past times, Brian decided they had to be collected before their memory faded with each passing generation. He compiled them into, Tales from Whiteleaved Oak