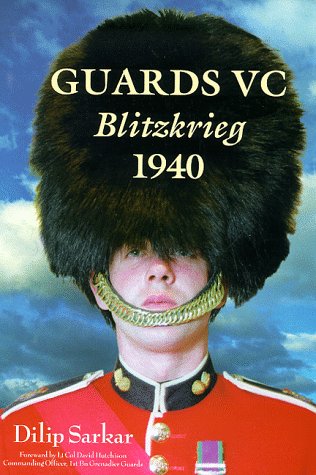 Promoting the excellence of 'Guards VC'.
Although better known for his superb air war works, Dilip Sarkar has done a superb job in recording this day-by-day war diary of a BEF infantry formation during the Fall of France. Every angle is covered through previously unpublished first-hands accounts and direct quotes from the records of both sides.

All we really have to do to confirm the excellence of this title is refer the customer to the following comments:-

LORD FORBES: Absolutely first-class. I am quite stunned at how you have brought my old unit back to life!

CAPTAIN SIR EDWARD FORD: Fascinating. I was the 3rd Grenadier's Intelligence Officer in 1940 and not even I knew this much about what was going on!

FORMER GUARDSMAN BILL LEWCOCK, a survivor of the VC action: All accounts I have ever read on the Fall of France are mere generalisations when compared to 'Guards VC'. Dilip Sarkar's book, however, brings out the personal experiences of many involved and provides a wonderfully vivid picture of positions and battles fought. Also he has given the German version which I have certainly not seen before. Now the comrades that we lost will always be remembered with honour.

LT COL HS HANNING: It is an immense piece of work and Dilip is to be greatly congratulated. I am struck by the way he has handled and presented so much of the detail. It is much easier to turn a story like this entirely into prose. Many authors do so and the result is nothing like so attractive or interesting. You have also assembled a tremendous collection of photographs and presented them beautifully.

DAVID ROWLANDS BA(Hons), Military Artist: An excellent book! What a well researched and well-published piece of work. It is a real pleasure to look through and handle.

GUN MART: A welcome addition to the library of any military enthusiast. Dilip Sarkar's first military book - let's hope it will not be his last!

Given the foregoing, it would be superflous to mention that the book's launch was endorsed by and received the support of the Dunkirk Veterans' Association, Grenadier Guards, Coldstream Guards, Royal Hampshire Regiment, etc etc!

Definitely not to be missed.

Why 'Guards VC' is a vital contribution to WW2 history.
My grandfather, former Guardsman HH Smith was captured with, and saved the life of, Lance Corporal Harry Nicholls VC, also of the 3rd Grenadier Guards, near Pecq on May 21st, 1940. My grandfather never discussed his wartime experiences and it was at his funeral in 1983, in fact, that I heard of his connection with such august events.

Since then, despite having also written nine RAF/Luftwaffe Battle of Britain related books, I have been researching the events befalling the 1st Guards Brigade (3rd Grenadier, 2nd Coldstream and 2nd Hampshires) between September 1939-June 1940. Naturally the emphasis is on the period May 10th, 1940, the date the German invasion of the West began, and June 1940, i.e. after the Dunkirk evacuation. The VC-winning action of May 21st is reconstructed in great detail using not only the contemporary records of BOTH sides, but equally the first-hand accounts of British and German survivors. The same applies to the other VC won on May 21st, by CSM George Gristock, 2nd Royal Norfolks. All of the actions fought by 1st GB are re-fought in similar fashion, and thus give us an idea of what it was really like for a typical BEF unit during the Fall of France.

As this research proves, however, it was not the rout that many today think it was, and the BEF fought both bravely and determindly against overwhelming odds.

Finally we present an up-to-date battlefield tour of the Pecq site, and report on our last visit during which many relics were discovered.

100 photographs illustrate 'Guards VC', many of German origin, and nearly all are previously unpublished.

That time is running out to produce such work is emphasised by the sad fact that my grandfather's old comrades Les Drinkwater and Arthur Rice, both of whom are featured in the book and were early inspirations, died this week (August 1999, i.e. three months after publication).

I can guarantee that you will be amazed at the amount of fighting that went on before Dunkirk, and hope that this book is an appropriate tribute to all concerned.