Items related to Barnes and Mortlake Past: With East Sheen

Maisie Brown Barnes and Mortlake Past: With East Sheen

Barnes and Mortlake Past: With East Sheen 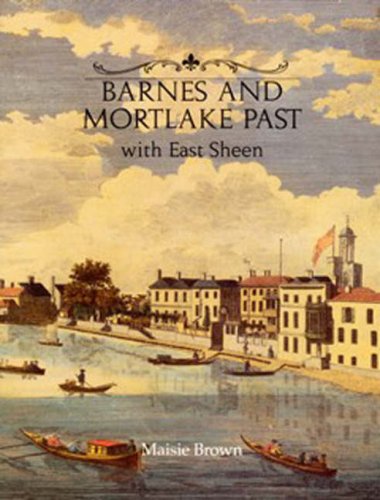 Dust-jacket reads: This history of a delightful area of Lon­don has been researched by members of the Barnes and Mortlake History Soci­ety, whose own numerous publications are highly regarded. The editor, Maisie Brown, has been chairman of the Soci­ety since 1991. Until the beginning of the nineteenth century, Barnes was regarded as a re­mote and inaccessible Thameside vil­lage. But the construction of Hammer­smith Bridge in 1827 and the coming of the railway in 1846, opened up Barnes to development. The high quality of houses at that time was appreciated by early commuters. Picturesque Mortlake has an old indus­trial history. It includes the famous Tapestry Works, opened in the reign of James I, the two potteries of Sanders and Kishere, and the still flourishing Mortlake Brewery. These enterprises were by the river, where the heavy raw materials and finished products could be received and despatched. But adjoining Mortlake was East Sheen, which because of its seclusion and views, became a place of villas and mansions. The fascinating story of these three places is told with the aid of numerous illustra­tions, many published for the first time.

The history of a once bucolic part of London has been researched by the Barnes & Mortlake History Society. Until the beginning of the 19th century Barnes was inaccessible, but the construction of Hammersmith Bridge in 1827 and the coming of the railway in 1846 changed that. Picturesque Mortlake has an industrial history which includes the notable Tapestry Works, opened in the reign of James1, two potteries and the famous Mortlake Brewery. Adjoining, secluded East Sheen was a place of villas and mansions.

1. Barnes and Mortlake Past