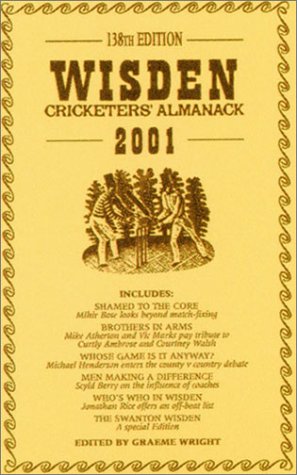 Wisden 2001 records a year when the scandal of match-fixing rocked cricket's very core: Mihir Bose, the Daily Telegraph's award-winning columnist, examines the naming and shaming of South Africa's captain, Hansie Cronje, by looking beyond the headlines to the cultural, economic and political interests in the power-struggle to control international cricket. Michael Henderson jumps into the "county v country" debate as he asks "Whose Game Is It Anyway?"; Scyld Berry wonders how non-English coaches get the best out of English cricketers; and Jonathan Rice reveals an off-beat Who's Who in Wisden.

Whilst the British climate may not truly herald the beginning of summer until a later date, the publication of this cricketing bible each April signals the imminent start of the season for our summer game. As ever, the latest edition Wisden Cricketers' Almanack 2001, stands as a benchmark for every aspiring sports annual. Wisden represents something of a constant in a rapidly changing cricketing world. Yet it almost seems that each passing year gives the editor and writers even more food for thought. In the 2001 Almanack, alongside the usual welter of information and statistics, focus falls on the match-fixing scandals that have blighted the game over the last year or so, and, on a related theme, the need for the world game's governing body, the ICC, to adopt a stronger stance on major issues. Other featured articles pay tribute to the West Indian pace duo of Ambrose and Walsh, the former profiled by England opener Michael Atherton, and to the sadly departed Sir Colin Cowdrey. A short obituary to the game's greatest ever exponent, Sir Donald Bradman, who passed away as Wisden was on the presses, is also included. In addition, there's always room for the light-hearted side of the game too, including the story of a naked cricket match which took place in Yorkshire last year. As ever, Wisden sets a high standard for sports publishing, and remains a great read for all cricket-lovers. --Trevor Crowe

New Zealander Graeme Wright edited Wisden from 1986 to 1992; The Times said that his final Editor's Notes "in parts resembled a valedictory v-sign to all within cricket he resents". His views on cricket today are keenly awaited.