Items related to The Islands that Roofed the World: Easdale, Seil, Luing...

Mary Withall The Islands that Roofed the World: Easdale, Seil, Luing and Belnahua

The Islands that Roofed the World: Easdale, Seil, Luing and Belnahua 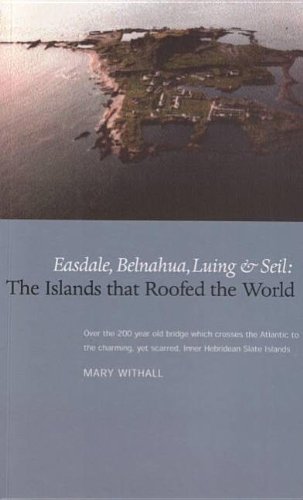 The Slate Islands lie off the west coast of Argyll. Slate has been taken from these shores from their earliest recorded history and the richness and quality of the deposits meant that in the eighteenth and nineteenth centuries slate quarrying was one of the most important industries in Scotland. The Breadalbane family owned the land of Easdale and its surrounds for over 400 years and of course roofed their own buildings in slate as well as may important buildings, including Cawdor Castle in Inverness-Shire and Glasgow Cathedral. The geology, the industry, the people and their way of lie: this is the story of the Slate Islands past, present and future.

MARY WITHALL spent 35 years in Secondary and Further Education before retiring to the Island of Easdale in Argyll in 1988. She became archivist to the Easdale Island Museum in 1989. She is a founder member and trustee of the Slate Islands Heritage Trust which was formed in March 2000.

This text contains a comprehensive history of the slate industry in the west of Scotland, complete with a detailed and vivid account of the communities on the Atlantic bound islands of Easdale, Seil, Luing and Belnahua. The author is the Easdale Island Folk Museum archivist.

1. Easdale, Belnahua, Luing and Seil: The Islands That Roofed the World