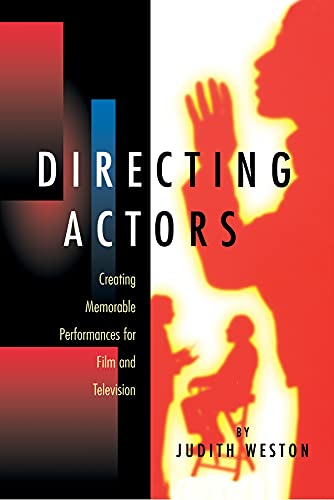 Internationally-renowned directing coach Weston demonstrates what constitutes a good performance, what actors want from a director, what directors do wrong, script analysis and preparation, how actors work, and shares insights into the director/actor relationship.

Greetings to readers
Hello! I wanted to say THANK YOU to all the readers who have been emailing me with their responses to the book. It means everything to me to know that you are finding DIRECTING ACTORS helpful and even inspiring. I've been doing quite a bit of traveling since the book came out -- Last year I went to a number of film festivals, and gave seminars and book signings at the Sundance Festival, the Taos Talking Pictures Festival, bookstores in New York and San Francisco, as well as a number of book signings in Los Angeles. I traveled as a teacher too -- In addition to my Acting for Directors workshops in Los Angeles, I went last year twice to Amsterdam, giving three workshops on each visit. And I returned home a few days ago from a trip to Helsinki, Finland, where I taught two workshops. I feel very lucky to be able to meet filmmakers from all over the world, in person and via email.

I'll be teaching an Acting for Directors workshop in New York City on March 27-29. If you are interested in information on the New York workshop, or my workshops in Los Angeles, please email me. Thank you and best wishes. Judith

Directing film or television is a high-stakes occupation - the white water rafting of entertainment jobs. It captures your full attention at every moment, calling on you to commit every resource and stretch yourself to the limit. But for many directors, the excitement they feel about a new project tightens into anxiety when it comes to working with actors. "Directing Actors" is a method for establishing creative, collaborative relationships with actors, getting the most out of rehearsals, troubleshooting poor performances, and giving directions that are briefer and easier to follow. The following issues are discussed: what constitutes a good performance; what actors want from a director; what directors do wrong; script analysis and preparation; how actors work; and the director/actor relationship. "Directing Actors" is the first book of its kind. Judith investigates in detail the sometimes painful, often frustrating, but potentially exhilarating relationship between actor and director. It provides simple, practical tools that directors and actors can use immediately - and takes the reader on a journey through the complexities of the creative process itself.

Although one chapter is entitled 'Result Direction and Quick Fixes', the tools and suggestions of the book are now superficial band-aids or facile jargon; they are radical excursions into the perhaps most misunderstood artistic collaboration - that of director with actor. Judith Weston brings to this book twenty years of professional acting and nine years of teaching Acting for Directors. Her students include academy Awards and Emmy winning directors, writers and producers of studio and independent feature films, television episodes and MOWs. The first book to directly address directors about working with actors.