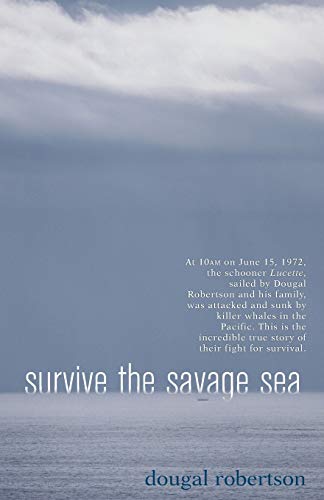 In June 1972, the 43-foor schooner Lucette was attacked by killer whales and sank in 60 seconds. What happened next is almost incredible. In an inflatable rubber raft, with a 9 foot fiberglass dinghy to tow it, Dougal Robertson and his family were miles from any shipping lanes. They had emergency rations for only three days and no maps, compass, or instruments of any kind. After their raft sank under them, they crammed themselves into their tiny dinghy. For 37 days-using every technique of survival-they battled against 20-foot waves, marauding sharks, thirst, starvation, and exhaustion, adrift in the vast reaches of the Pacific before their ordeal was ended by a Japanese fishing boat. The Robertsons' strong determination shines through the pages of this extraordinary book which describes movingly their daily hopes and fears, crises and triumphs, tensions and heartbreaks.

What a brave man, what an eloquent writer! In case of shipwreck I would send for Dougal Robertson or, in absence of him, reread his book in order to find out what on earth to do next.--Nicholas Monsarrat

...[a] well-written account....an unexpectedly personal view of a man's physical and a woman's emotional courage that, when bonded, produced the strength to survive.--Sailing

For stark excitement, marine natural history, practical lessons, and human love and stresses, few records, if any, of hazard and survival have ever bettered it.--The Instrumentalist

[The Robertsons] survived and their tale is a triumph of human resource and determination against terrible odds.--Cruising World

Dougal Robertson was born in Scotland in 1924 and spent the war in the Merchant Marine. He and his wife Lyn lived on a farm in England for a number of years before deciding to go on a circumnavigation with their children. They now live in France.

Book Description Sheridan House, 1994. Paperback. Condition: New. Reprint. Paperback. After their 43-foot schooner was stove in by a pod of killer whales, the six members of the Robertson family spent 37 days adrift in the Pacific. With no maps, compass, or nav.Shipping may be from our Sydney, NSW warehouse or from our UK or US warehouse, depending on stock availability. 224 pages. 0.400. Seller Inventory # 9780924486739