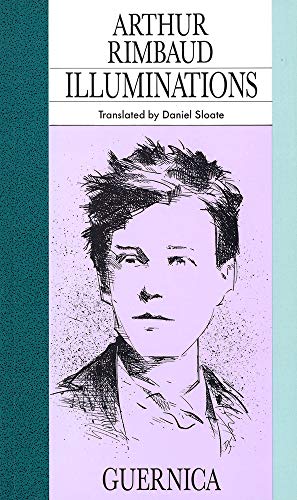 Poetry. Bilingual Edition. Translated from the French by Daniel Sloate. This edition of Rimbaud's masterpiece marks the first translation of ILLUMINATIONS that has been praised for its exquisite interpretation, particularly by American translators. Translator and poet Daniel Sloate is Professor of Linguistics at the Universite de Montreal.

The poetic genius of Arthur Rimbaud (1854-1891) blossomed early and burned briefly. Nearly all of his work was composed when he was in his teens. During the century following his death at thirty-seven, Rimbaud's work and life have influenced generations of readers and writers. Radical in its day, Rimbaud's writing took some of the first and most fundamental steps toward the liberation of poetry from the formal constraints of its history, and now represents one of the most powerful and enduring bodies of poetic expression in human history.
Wyatt Mason has translated the works of various contemporary French writers, and has been a finalist for the French-American Foundation Translation Prize. His translation of Arthur Rimbaud's poetical and prose works, "Rimbaud Complete," appeared in 2002 from the Modern Library. His writing has appeared in "Harper's," "The Nation," and the "Los Angeles Times," He was named a fellow of the New York Public Library's Dorothy and Lewis B. Cullman Center for Scholars and Writers for 2003-2004. His current projects include a new translation of Dante's "La Vita Nuova," for the Modern Library. He is also at work on a translation of the essays of Michel de Montaigne.

This text is in English and French. This edition of Rimbaud's masterpiece marks the first translation of "Illuminations" that has been praised for its exquisite interpretation, particularly by American translators.