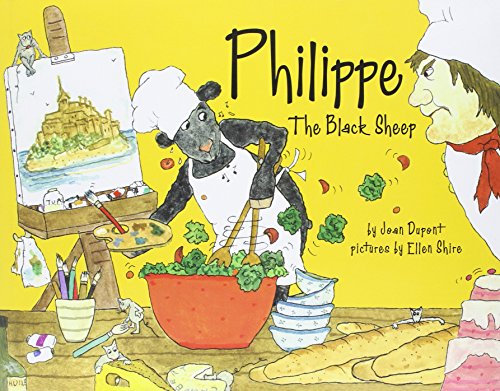 This is the story of Philippe, of France, a Salt Marsh Lamb with artistic ambitions. After an arduous journey, he ends up in a Mont Saint-Michel kitchen with a cruel chef -- until he's freed to do his art. The underlying message is to follow your star. With blurbs by Jacques Pepin, model Carmen Dell'Orefice, librarian Katharine Branning of the French Institute Alliance Francaise in New York, and ballerina Karin von Aroldingen. Easily held and shared by parents, caregivers, and teachers eager to explore France, food, and dreams of the arts with their children and students.

Joan Dupont, author, writes on film and the arts and is known for her interviews in the International Herald Tribune and The New York Times. This foray into children's fiction was inspired by a visit to the bay of Mont Saint-Michel. Ms. Dupont, originally a New Yorker, lives mainly in Paris.

This sheep, Philippe, wants to break from the flock. He is an artist -- and he only wants to paint. How he ends up in a kitchen, with a cruel chef, until he's freed to do his art, is the tale told on the following pages.