Items related to Attic in Greece: A Very English Adventure 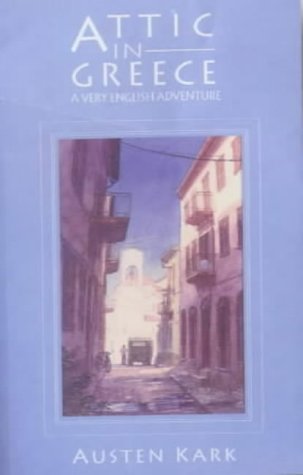 Austen Kark fell in love with Greece and its people in the early 1960s, but it wasn't until his retirement from the BBC in the late 1980s that he was able to fulfil his long-held plan of buying a house there. For three months he and his wife, Nina Bawden, travelled around the country they already knew deciding where to settle and dismissing possibilities - islands (too remote), olive groves halfway up mountains (too dull, too noisy, all those donkeys) - and finally decided on Nauplion, the prettiest town in Southern Greece. They found an almost derelict house, whose outside walls were built of stone at the bottom and plastered tree branches and rubble at the top. Against everyone's advice they decided to buy it, but before the purchase agreement was signed, live hand grenades were found in its roof and then it fell down altogether. To the despair of his friends (and sometiomes his wife) Austen perservered with his purchase. He found the local architects and builders to create a lofty eyrie above the town, survived the seemingly inevitable delays and disasters from plumbers, electricians and the Greek bureaucracy, manoeuvred their belongings through customs and is still trying to negotiate the system of registering his car. Yet this is not simply a journal of a house purchase, it is about the Greeks - the joys of the sun and sea, and the way they live and think and respond to strangers.

Book Description Paperback. Condition: Very Good. The book has been read, but is in excellent condition. Pages are intact and not marred by notes or highlighting. The spine remains undamaged. Seller Inventory # GOR001897195

Book Description Paperback. Condition: Good. The book has been read but remains in clean condition. All pages are intact and the cover is intact. Some minor wear to the spine. Seller Inventory # GOR007656543

Book Description Paperback. Condition: Used; Good. **Simply Brit** Shipped with Premium postal service within 24 hours from the UK with impressive delivery time. We have dispatched from our book depository; items of good condition to over ten million satisfied customers worldwide. We are committed to providing you with reliable and efficient service at all times. Seller Inventory # 1566197

Book Description Paperback. Condition: Good. Connecting readers with great books since 1972. Used books may not include companion materials, some shelf wear, may contain highlighting/notes, may not include cdrom or access codes. Customer service is our top priority!. Seller Inventory # S_334665219

Book Description Paperback. Condition: Good. Item is in good condition. Some moderate creases and wear. This item may not come with CDs or additional parts including access codes for textbooks. Might be an ex-library copy and contain writing/highlighting. Photos are stock pictures and not of the actual item. Seller Inventory # DS-0907237649-3