Items related to The Emirates by the First Photographers

Facey, William; Grant, Gillian The Emirates by the First Photographers

The Emirates by the First Photographers 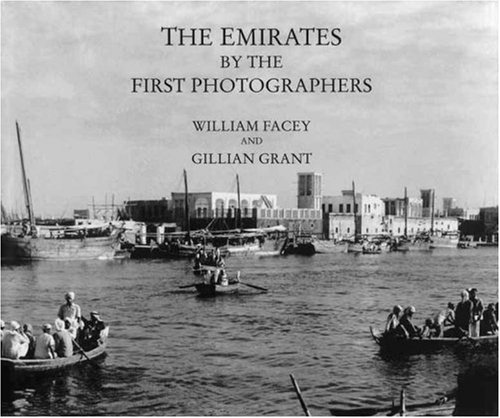 The Emirates by the First Photographers covers the period between 1900 and 1962, which saw the Emirates' emergence from independent shaikhdoms to unification as the United Arab Emirates and the arrival of oil wealth. It is an extraordinary visual record of a crucial time before the old way of life was swept away. It draws on all the known photographic collections from the time of the first traveller-photographers.
Photographers represented include Vaughan and A. T. Wilson in the 1920s, Hay in the 1930s, and Thesiger and Codrai in the 1940s and 1950s. Sources include such institutions as the Royal Geographical Society, the Middle East Centre at St. Antony's College, Oxford, and the National Maritime Museum. Company archives include the British Airways Archive, the BP Archive at Warwick University and those of other oil companies.
The chief aim is to record the immemorial way of life, now all but entirely vanished. These remarkable pictures are accompanied by a text setting them in their historical context.

"For those with an interest in the development of the Middle East, there are few finer publications than these." -- Oman Times

The speed of social and economic change in the United Arab Emirates has been so rapid that the way of life familiar to the previous generation has all but vanished. Captured for all time through the lens of a camera, this heritage is revealed through this collection of photographs. Accompanied by an authoritative text, they span the first 60 years of the 20th century and tell a remarkable story of a determined people, and of a state that has literally grown from the sand. In the space of 40 years, the exploitation of rich oil fields, and the judicious planning and development, has propelled the United Arab Emirates on to the international stage. This leap to modernity was not without its struggles and difficulties, but thse seven small sheikhdoms have been blessed with wise and far-sighted leardership. More than a quarter of a century after unification and the achievement of fully independent statehood, this book looks back on the country's past; its tragedies and triumphs; its challenges and achievements.

1. Emirates by the First Photographers

Book Description Stacey International, 2001. Hardcover. Condition: Good. Connecting readers with great books since 1972. Used books may not include companion materials, some shelf wear, may contain highlighting/notes, may not include cdrom or access codes. Customer service is our top priority!. Seller Inventory # S_223244437

2. The Emirates By The First Photographers

Book Description Stacey International, London UK, 1996. Hard Cover. Condition: Very Good. Dust Jacket Condition: Good. The dust jacket has a number of intents and creases along the top, as if it has been used as a rest for something, as well as general creasing and scuffing on the edges. The top corner has a pen mark. The cover has some scuffing on the bottom. 128 pages with b&w photographs. Due to the disruption to international deliveries as a result of COVID-19 we are currently only posting items WITHIN AUSTRALIA. Size: Size F: 9"-10" Tall (228-253mm). Seller Inventory # 147244

3. Emirates by the First Photographers

Book Description Stacey International, 2001. Condition: Good. A+ Customer service! Satisfaction Guaranteed! Book is in Used-Good condition. Pages and cover are clean and intact. Used items may not include supplementary materials such as CDs or access codes. May show signs of minor shelf wear and contain limited notes and highlighting. Seller Inventory # 0905743911-2-4

4. The Emirates by the First Photographers

5. The Emirates by the first photographers.