Items related to T.S.Eliot: A Memoir 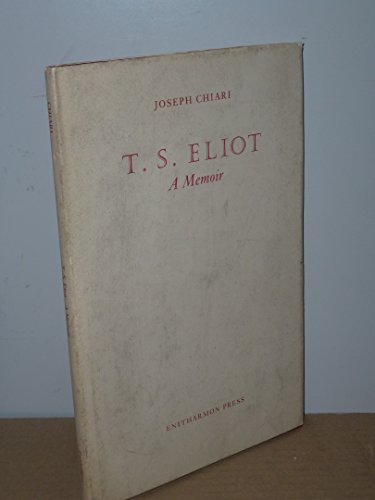 Joseph Chiari first met T. S. Eliot in 1943 when de Gaulle appointed him as cultural and political envoy to the Free French organisation in Scotland. Their friendship deepened and remained close until Eliot's death in 1965. This short but moving and sympathetic memoir of Eliot the man, has been approved by his widow and is one of the few written by a close friend since the poet's death. With previously unpublished photographs.

Joseph Chiari was born in Corsica and has lived in Great Britain since 1940; he is a Docteur-es-Lettres and author of some three dozen books of literary criticism, philosophy and poetry and has taught at the universities of London and Manchester.

Book Description Hardcover. Condition: Good. Connecting readers with great books since 1972. Used books may not include companion materials, some shelf wear, may contain highlighting/notes, may not include cdrom or access codes. Customer service is our top priority!. Seller Inventory # S_265399276

Book Description Condition: Good. A+ Customer service! Satisfaction Guaranteed! Book is in Used-Good condition. Pages and cover are clean and intact. Used items may not include supplementary materials such as CDs or access codes. May show signs of minor shelf wear and contain limited notes and highlighting. Seller Inventory # 0905289331-2-4