Items related to Aviation in Birmingham 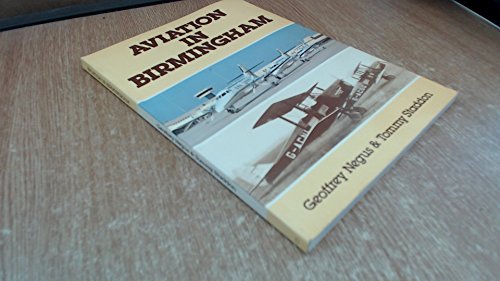 Book Description Paperback. Condition: Very Good. The book has been read, but is in excellent condition. Pages are intact and not marred by notes or highlighting. The spine remains undamaged. Seller Inventory # GOR004026599

Book Description Soft cover. Condition: Near Fine. 1st Edition. Binding is fine in clean covers. Corners and spine ends are good with a slight crease to one corner. Text pages and b/w illustrations are all clean with no markings or inscriptions. Dispatched same or next working day, in protective packaging. Seller Inventory # 015126

Book Description Card Covers. Condition: VG+. No Jacket. Photos (illustrator). 1st. This study of aviation in the Birmingham area traces its origins back to balloon flights in the late 1700s. Associations with the modern era of aviation are found at the first British Aero Show at Olympia, in early 1909, where a number of exhibits from this industrial city were displayed. Early attemps to locally make and fly a successful aircraft are then examined, leading into the First World War with a large training base established at Castle Bromwich, In addition to training squadrons a number of operational units were also based there, mainly on Home Defence duties. The development of aviation between the two Word Wars, include the provision of facilities for rapidly developing commercial operations and the formation of Auxilliary Air Force 605 Squadron (County of Warwick) in the mid-1920s. The late 1930s saw Britain preparing for war and plans included expansion of the aircraft industry in Birmingham with the development of shadow factories. During the war years more that 2700 aircraft, fighters, bombers and other types were produced there, as well as many thousands of engines and aicraft equipment. Once again Castle Bromwich became a training base but some operational flying took place in the area. The latter text mainly refers to the post -WWII civilian aviation revival up to the jet age age including visits by Concorde --- but before them were a host of light aircraft, piston and prop-jet aircraft from various makers, some of which are now largely forgotten. This is a well presented and written history of aviation evolution at one major British city, with the text supported by an excellent and extensive collection of b/w photos, recalling some now little known aircraft., First edition of 1984 from Midland Counties Publications, 128 pages including 17 appendices, some presenting WWII aircraft production details, b/w photos throughout, one map. Pictorial card covers are VG+ with two light creases to rear panel, internally excellent, no inscriptions. Size: 23.5cm By 17cm. Seller Inventory # 004661