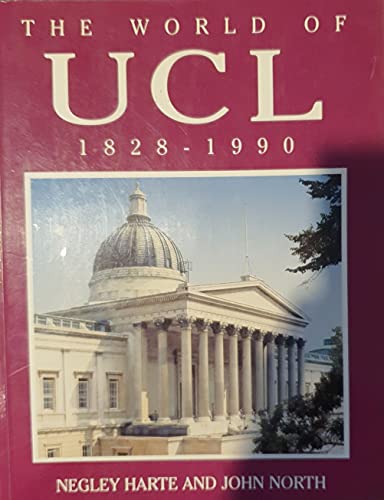 This splendid illustrated history of University College London (UCL) has been fully revised and updated, since its first publication in 1978 as part of the celebrations of the College's 150th anniversary. The new edition now includes all the developments at UCL in the past twelve years, covering the period of Sir James Lighthill's time as Provost, and the expansion of the College to include the Institute of Archaeology and the new University College and Middlesex School of Medicine, which was created from the former University College Hospital Medical School and the Middlesex Hospital Medical School. Beginning with the rigours of the "cuts", the 1980s turned out to be a remarkable period of growth for UCL. As well as a full updating, "The world of UCL " has been thoroughly revised in the light of new discoveries about the College's history. For example, it now includes a reproduction of Shepherd's 1835 watercolour of the College, as well as the recently discovered extraordinary photograph of Japanese students at the College in 1863, some years before the Meiji Restoration (which marked the dawn of modern Japan). The book has been completely redesigned as a fresh pictorial representation of the first modern university in Britain. In both teaching and research the College has been throughout its existence a pioneer of new ideas and new methods. This book assesses UCL's history and its changing contribution to society. Containing over 470 illustrations, it presents a wealth of fascinating pictorial material, together with lively and well informed text. Prepared with full access to all College archives and collections, this attractive book is no solemn official record but an engaging popular history of UCL, an institution with a long-established tradition of enlightened liberalism and one of the most distinguished records in the world of higher education and research. "The authors are both longstanding members of the Department of History at UCL, as Senior Lecturers respectively in economic history and ancient history. After their joint labours on the first edition of "The world of University College London" in 1978, Negley Harte defected to the second University of London, to write "The University of London 1836--1986: an illustrated history" (Athlone Press 1986). Both Negley Harte and John North have been editors of the UCL house newspaper at various stages of its development, and have between them accumulated an unrivalled experience of UCL life since the 1960s -- not just its teaching and research, but its committees and celebrations, its union meetings and departmental dramas, its building schemes and financial stratagems. In preparing and writing this book, they have had full access to all UCL archives and collection. This book is intended for uCL students, staff, alumni and friends; educational history.

Book Description Paperback. Condition: Used; Good. Dispatched, from the UK, within 48 hours of ordering. This book is in good condition but will show signs of previous ownership. Please expect some creasing to the spine and/or minor damage to the cover. Aged book. Tanned pages and age spots, however, this will not interfere with reading. Seller Inventory # CHL7569663

Book Description Condition: Good. Ships from the UK. Former library book; may include library markings. Used book that is in clean, average condition without any missing pages. Seller Inventory # GRP76722400