Items related to The Pentateuch and Haftorahs

The Pentateuch and Haftorahs

The Pentateuch and Haftorahs 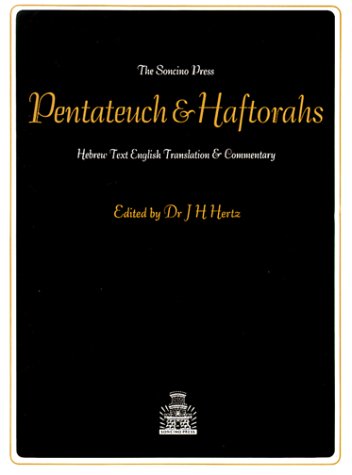 "This Soncino edition of the five books of Moses and Haftorahs with extensive introductions, notes and commentaries prepared under the editorship of the former Chief Rabbi Dr J H Hertz has been hailed as a great scholarly achievement by authorities of the Bible everywhere ... The notes are brief and free from technicalities. They aim at the elucidation of the Text and the exposition of the spiritual and ethical teachings of the Torah. A vast literature has been sifted, apart from the standard Jewish and non-Jewish commentaries and illuminating extracts which are included in the notes. While reproducing all the advantages that made the original edition successful, the Soncino edition incorporates two new and interesting features which greatly enhance its value and utility. In place of the Revised Version which was originally adopted as the Translation, the American Jewish Version has been substituted. This translation has been universally accepted as conforming more faithfully to traditional Jewish interpretation. Secondly, the work has been carefully planned so as to occupy a single volume only in place of the original five. This copyright Edition, published under the authority of the Trustees of the late Dr J H Hertz, accordingly presents in one light and compact volume over 1,000 comprehensive pages of Hebrew Text, English Translation and Illuminating Notes".

Book Description Soncino Pr Ltd, Jacksonville, Florida, Etats-Unis, 2014. Hardcover. Condition: New. Second edition (2014). Classic Hebrew-English edition of the Five Books of Moses popularly known as the Hertz Chumash. In this compact volume, the late Chief Rabbi of England, Rabbi Dr. Joseph Hertz, provides readers with a lucid exposition of the text and the spiritual and ethical teachings of the Torah, culled from a wide range of scholarly literature. It contains the full Hebrew text, line-by-line English translation, and the classic Hertz commentary. Complete with all the Haftorahs for holidays and special Sabbaths. MULTIPLE COPIES AVAILABLE ON PRIOR DEMAND. Seller Inventory # 000592