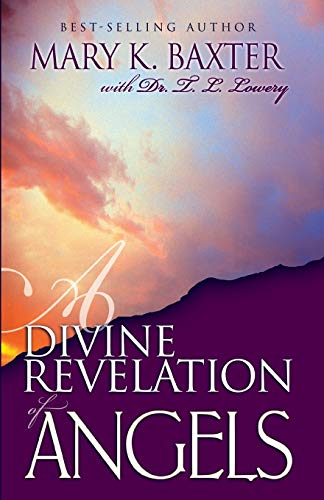 Best-selling author Mary Baxter describes dreams, visions, and revelations of angels that God has given her.
Explore the fascinating dynamics of angelic beings--their appearance, their assigned functions and roles, and how they operate, not only in the heavenly realms, but also in our lives here on earth. Discover the difference between good angels and bad angels (demons) and their activities as you learn to distinguish angels of light from angels of darkness.
God's holy angels are magnificent beings who are His messengers and warriors sent to assist, sustain, protect, and deliver us through the power of Christ.

Author Mary Baxter takes us on a journey that reminds us of how much God really cares for us and watches over us. This book about angels is filled with her experiences in dreams and visions from God, but what she says is backed up by Scripture. You will rejoice in your spirit as you read about the miraculous and unusual ways God rescues and provides for His children. God is speaking to us through these words.
-Jentezen Franklin, Pastor, Free Chapel Worship Center and Kingdom Connection Int'l Television Program
The work of angels, God's messengers, can be seen throughout Scripture. However, many believers today have a man-created vision of angels. Who they are and what they do are often misunderstood due to the work of the secular press and its influence over television, film, and popular literature. A Divine Revelation of Angels sets the record straight! A book that is both scripturally sound and easy for anyone to understand.
-Rod Parsley, Pastor, World Harvest Church and CEO, Breakthrough Media Ministries
A Divine Revelation of Angels describes the dreams, revelations, and visions of Mary Baxter, revealing angels at work today. It is most interesting and absorbing. I believe you will be inspired by this book.
-Oral Roberts, Founder, Oral Roberts University
The Bible frequently mentions angels--God's heavenly messengers or servants. In A Divine Revelation of Angels, Mary Baxter combines biblical teaching with her own experiences, giving the reader thought-provoking and enlightening insights about the ministry of angels.
-Dr. David Yonggi Cho, Senior Pastor, Yoido Full Gospel Church

1. A Divine Revelation of Angels

2. A Divine Revelation of Angels (Paperback or Softback)

3. A Divine Revelation of Angels

4. A Divine Revelation of Angels

Book Description Whitaker House,U.S., United States, 2003. Paperback. Condition: New. Language: English. Brand new Book. Best-selling author Mary Baxter describes dreams, visions, and revelations of angels that God has given her. Explore the fascinating dynamics of angelic beings--their appearance, their assigned functions and roles, and how they operate, not only i. Seller Inventory # AAV9780883688663

6. A Divine Revelation of Angels

7. A Divine Revelation of Angels

9. A Divine Revelation of Angels