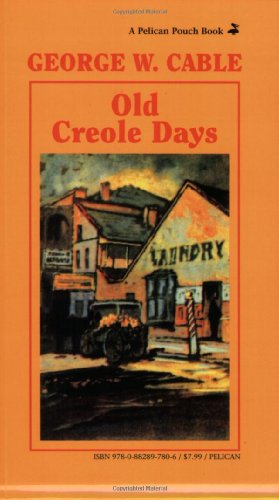 One of the greatest and most celebrated Southern writers of his day, George Washington Cable (1844-1925) helped to lead the local colorist movement of the late 1800s with his pioneering use of dialect and his skill with the short story form. A Southern reformist, Cable wrote faithful portrayals of Creoles and their culture that depict the Creole way of life during the transitory post-Civil War period.

Originally published in 1879, Old Creole Days catapulted Cable to national recognition. The stories within reflect the everyday life of the New Orleans Creoles through a mixture of humor and the unique Creole patois. Cable's best-known work, Old Creole Days includes such famous stories as "Posson Jone'," "Jean-ah Poquelin," and "Madame Dï¿1/2licieuse," tales that are alive with the sounds and scenes of nineteenth-century New Orleans.

One of the greatest and most celebrated Southern writers of his day, George Washington Cable (1844-1925) helped lead the local-color movement of the late 1800s with his pioneering use of dialect and his skill in the short-story form. After serving in the Confederate army, he began to write for the New Orleans Picayune. Cable has been called the most important Southern artist working in the late-nineteenth century, as well as the first modern Southern writer. A complete listing of his books published by Pelican is available by request.